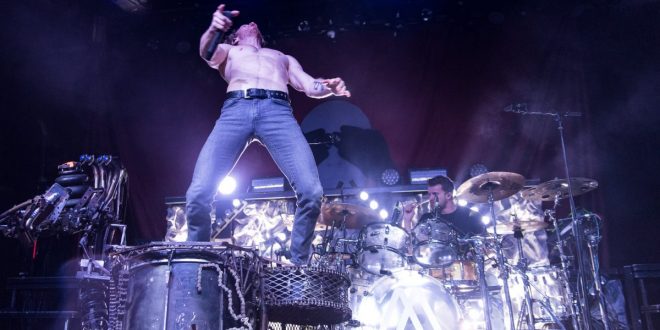 It’s practically three years to the date since I first experienced Nothing More performing live at Irving Plaza, then touring to support a brand new self-titled album, released through Eleven Seven Music. That was 2015. A lot has happened in three years: various worldwide tours, multiple major festival appearances including two performances aboard Shiprocked ’18, an incredible new album The Stories We Tell Ourselves, and three Grammy nominations. The band’s rapid success is both admirable and awe inspiring.

It’s Nothing More’s unapologetically in-your-face stage presence that truly sets them apart. Leave all expectations at the door, forget all you think you know about a live show and allow yourself to be completely wrapped up in an hour and a half of unrelenting energy. Last night’s explosive New York City show exceeded all of my learned expectations, because despite how many times I see them, the bar keeps getting placed higher and higher. The band careened through a 17-track setlist including road-tried favorites like “Mr. MTV,” “This is the Time” and “Jenny,” alongside a heavier off the newest album like “Go to War,” “Do You Really Want It?” and “Let ’em Burn.” Also worth mentioning is that since making its debut on Shiprocked a few weeks ago, Nothing More has incorporated the emotional “Fadein/Fadeout” onto their setlist.

Check out some of the shots from last night’s New York City show. Then, find the nearest city on the tour dates listed below, get some friends together and get yourselves a ticket. You won’t be disappointed.