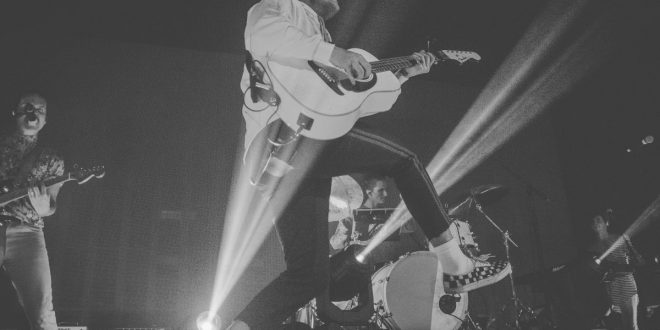 Folk-hop hybrid Judah & The Lion brought their Spring “Going To Mars” Tour to the intimate George’s Majestic Lounge in the heart of the Ozarks. Riding the momentum of their last album Folk Hop N’ Roll, which was released in 2016, Judah & The Lion made the first and sold out night of the tour an unforgettable one for Fayetteville.

Tall Heights warmed up the night with a combination of folk, jazz, pop and hip hop. They carried similarities to Judah & The Lion with a splash of tambourines and cello. The vocals were beautifully harmonized against the marching drum beats while purple lights struck a disco ball hanging from the ceiling, strikingly illuminating the room. The crowd cheered boldly, giving Tall Heights a warm and inviting welcome.

Cinematic-like suspense music lead up to the moment everyone was waiting for, intensifying as time crunched. Judah & The Lion burst onto the stage with their traditional T-Pain “Booty Work” cover, which immediately got fans moving. Frontman Judah Akers encouraged fans that everyone in the lounge was family. He asked the crowd to release all jitters tonight, to let go, and to live in the moment. With that being said, the band gave an incredible performance from start to finish, dancing all across the stage for tracks “Hold On,” “Kickin’ da Leaves,” and “Reputation.” The band’s quirky personalities were fun to watch on stage, playing very flamboyantly with smiles across their faces. “Y’all like that banjo?” shouts Akers, before easing into the intense track “Conversations.”

The fan interaction was remarkable, a constant throughout the entire show. For those familiar with Judah & the Lion’s show, the comical and friendly competition continues throughout this tour. For new fans who haven’t seen them before, I’ll spare the details for a surprise. The band brought up two lucky fans from the front row to help sing The Killers’ “Mr. Brightside.” Akers said, “You guys look like great singers… might as well put on a show” before getting the crowd pumped with “C’mon, get out of your cage!” The two young women did a wonderful job, and I loved the sweet guitar parts on the cover.

Acoustics were brought out for “Back’s Against the Wall” as bright orange lights highlighted all the band members.  A change of pace took place for “Our Love,” and the crowd swayed in synchronicity. It was evident the performance hit the sweet spot on many, some eyes in the crowd even filling up with tears. The hits were played as well. “Suit and Jacket” and “Take It All Back” made their appearance with the audience’s hands up in the air.

The night finished off with the band calling the Hogs (for those non-sports fans, it’s a “Woo pig sooie!” chant known in Arkansas.) The chant nearly shook the walls of George’s, and the crowd screamed in excitement as it made the show feel more homey. In which Judah & The Lion did just that, earning themselves a title as the Kings of Dickson.