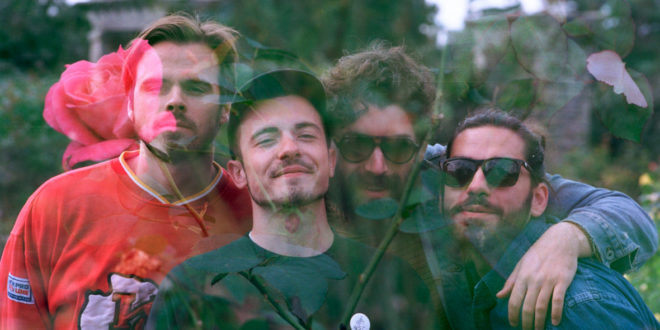 Kansas City, MO-based indie surf rock band Momma’s Boy has returned with their latest single “Want Me Back.” The track is the third and final in their three-part single series, following up “Don’t Talk About It” and “Personalize.” The sensual, groove-driven “Want Me Back” is injected with strong R&B, soul and Motown influence, and is a bit of a departure from the disheveled 60-70’s garage-rock sound of their debut 2017 EP, Liquid Courage.

“‘Want Me Back’ is about the moment you realize somebody likes you the way you like them,” says bassist Jared Bajkowski. “It explores all of the emotions that come with that thrill — giddiness, lust, apprehension, fear. Ultimately, its message is that you can’t live in fear of getting hurt. It’s better to let someone in, be vulnerable, and allow that feeling bloom into something big.“

If previous singles “Don’t Talk About It” and “Personalize” represent summer and fall, respectively, “Want Me Back” embodies the glittering hush of winter. The track’s dreamy keys and glossy groove blanket the track in an introspective mist. Contributing lead vocals and songwriting for the first time in the band’s discography, bassist Jared Bajkowski delivers wounded lyrics that explore the rush of starting of something new after recent heartache. “Want Me Back” is a journey through the whole cycle: the invitation to go out, the first move, and the fear that comes with feeling the spark. The chorus ties everything together, reveling in the thrill of mutual attraction. “Want Me Back” was recorded, mixed, and mastered in Studio A at Element Recording Studios by seasoned producer Joel Nanos, with a sparkling clean mix that accentuates all of the track’s quirks.

Born and raised in America’s heartland, Momma’s Boy is God’s honest truth. The four piece’s sound synthesizes elements of psych-pop, surf-rock, and garage rock based in the garage and power pop sounds of the ’60s and ’70s. Quinn Hernandez’s stormy and electric drumming style lays down smooth, body-moving grooves that often explode into furious thunder, while Jared Bajkowski’s melodic and liquid bass lines add a punchy, barking thickness that creates constant motion in the mix. Up front, Peter Beatty’s cool, shimmering guitars and swaggering croon dovetail with Shaun Crowley’s fiery, explosive guitar solos and smoky growl to bring the finishing spark to the group’s sonic experience. Together they emerge with a hooky sound that pushes the boundaries of surf, psych, and garage. Momma’s Boy is proud to have supported such notable artists as HOMESHAKE, And the Kids, LVL UP, Walker Lukens, The Phantastics, and the Architects.

“Want Me Back” is available now on Spotify.