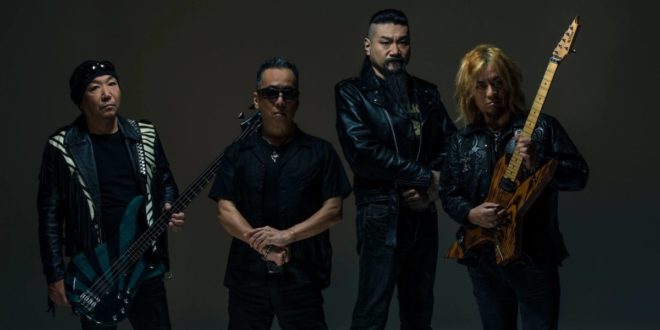 Japan’s Loudness have proven a pivotal force for well over three decades in not only the development, but longevity, of Japanese heavy metal. Formed in 1981, the Osakan quartet is best known for their western major label crossover success in the mid-80s, based on the hits “Crazy Nights” (off 1985’s Thunder in the East) and “Let It Go” (off 1986’s Lightning Strikes). Equally enduring, and to some extent underrated, are the workings of Akira Takasaki, the band’s leading axe man. Both his riffs and solos emit an interesting signature dynamic – piercing focus with unrestrained fluency.

Takasaki was open to providing insight into his musical progression, and how it was implemented into Rise To Glory. The album, which sees release on January 26, will be the band’s first since 2014’s The Sun Will Rise Again, and, counting their Japanese language releases, 30th overall.

ME: The release of your new album, Rise To Glory, is in conjunction with a major world tour. I understand that it will be your biggest tour since the 80s! What are you looking forward to the most about this tour?

Akira: I just want to follow my own pace and move steadily ahead.

ME: Speaking of the past, take me back to your initial days as a guitarist. Which bands or albums helped develop your playing style?

ME: In 1970s Japan, the New Rock era of Flower Travellin’ Band and Blues Creation was making way for emerging heavy metal at the time – which included bands like BOWWOW and Anthem. What can you tell me about your personal experience, in terms of seeing the progression of Japanese rock as you were starting out?

Akira: [From my experience], it wasn’t just domestic rock music making an impact at the time. There was also a lot of rock music from all over the world imported to Japan, which allowed an authenticity to take root there.

ME: I see that during this time, you had great success with the band Lazy. As you came off that success into the 80s, what was it about forming Loudness that resonated with you in a big way, and continues to inspire you today?

Akira: At all times, I have the passionate rock spirits within me. I have also been surrounded by great music instruments and friends.

ME: Moving forward to present day, Rise To Glory comes as your first album in four years. During the album’s creation process, when would you say the album really started coming together?

Akira: I began writing songs myself four years ago. Last May, I spent time with the band members at a studio near the sea and started the production of the album.

ME: For this album, you mention that you’ve played more guitars on it than any album of this era. Which types of gear and guitars do you like to use, to help give this album its sound?

Akira: I mainly use both the Killer Guitar signature series and ESP Random Star. I also use Les Paul and Stratocaster. Regarding amps, I mainly use Marshall and Friedman with Twin Reverb. I also use the Roger Mayer power amplifier.

ME: Did you experience any challenges with this particular album?

Akira: Yes. It was very tough to produce the album by myself, but I am very satisfied with the result.

ME: I like how nicely the album flows, with its balance of heavy, acoustic, and more progressive styles. How did you decide on the album’s track listing?

Akira: We discussed between three possible track listings, then selected the best one.

ME: The European and American release of Rise to Glory comes together with Samsara Flight, which is a collection of modern remakes for your hit songs. How did it feel to record those classics, and record them with an updated feel?

Akira: I am so happy that these songs from 35 years ago are now reborn, and became the metal sound in their ongoing forms.

ME: With Rise to Glory and Samsara Flight packaged together, do you feel that it offers the best representation of Loudness in their current form?

Akira: Yes, that is a great combination!

Akira: To the young folks out there, please have a listen to our soul of rock! If you like us, come to our gigs.

I come from a family who is passionate about all things music. I learned to sing at an early age, and by 13, had my very own Fender Strat guitar. I tried my hardest at learning all that I could. Because I was born with cerebral palsy, I had to teach myself an adaptive playing style. I learned to write and record my own music, despite these difficulties. In college, I started making great use of my writing abilities by reviewing music, as well as copy editing. I guess it's best to stick with what you know, while welcoming a fair challenge at the same time.
Previous AMERICAN SATAN (Sumerian Films) – Available to buy now on DVD/Blu-ray/Digital worldwide
Next Ways to Find the Best Drum Set