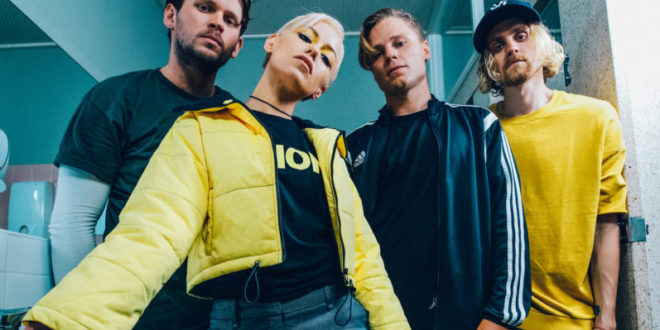 Katabasis, taken from the Ancient Greek κατάβασις (κατὰ “down” and βαίνω “go”), describes the descent of a mythological hero to the Underworld in search of information, understanding, or prophecy. Tonight Alive’s brand new album Underworld is vocalist Jenna McDougall’s own personal ‘katabasis:’

“The album is called Underworld, and I named it that because it reflects the ugly parts of me that I wasn’t ready to see until now.”

It’s track after track of powerful, deeply personal, punchy tunes. Despite their heavy, emotive content and lyrical complexity, these songs are surprisingly accessible and easy to listen to. Underworld has an epic, almost mythical sound to it, and listening to it takes you on that same journey of reflection.

Recent single and collaboration with Lynn Gunn of PVRIS “Disappear” is an anthem for escapists seeking freedom and detachment from life’s troubles. What really makes this partnership special is McDougall’s and Gunn’s vocals working in harmony throughout the track to create an almost hypnotic sound.

“The Other” is a powerful song about self-discovery and being the person you want to be. If Tonight Alive has been through a period of reflection and enlightenment, then uncovering this certainty of what is possible and desirable for a person to become must surely have been their goal.

A lot of Underworld sounds like a coping mechanism too. “Just For Now” focuses on living in the moment, holding onto something which may not last, but which can give you a temporary if ultimately unsatisfying fix. “Waiting For The End” paradoxically concerns living so that you are “not just waiting for the end,” and instead enjoying life.

“Looking For Heaven” is a welcome cool down after an album’s worth of highs. It’s stripped back, only featuring a piano melody and McDougall’s soulful voice.

Underworld’s best song, in my opinion, is its last, “My Underworld” featuring guest vocals from Corey Taylor. It ties the whole record together, with its themes of looking inwards to discover who you are as a person. Intentional or not, the voyage described in “My Underworld”- “sailing into deep blue storm clouds,” to “dive into my underworld,” to finally “feel at peace,” is reminiscent of many katabases. Tonight Alive take us on this journey with them, to confront our ‘ugly parts,’ without which we wouldn’t be true to ourselves.

Underworld is available to buy and stream here.

For more information, including tour details, check out Tonight Alive on social media:

Watch the video for “Disappear” featuring Lynn Gunn below:

Freelance arts, culture, and music journalist. Lots of words and some radio. Studying for an MA in Media and Journalism. Trying their best.
@lozreviews
Previous Press To MECO sign with Marshall Records, announce release date for new album
Next Gallery & Review: Avatar at Gramercy Theatre NYC 1/11/18