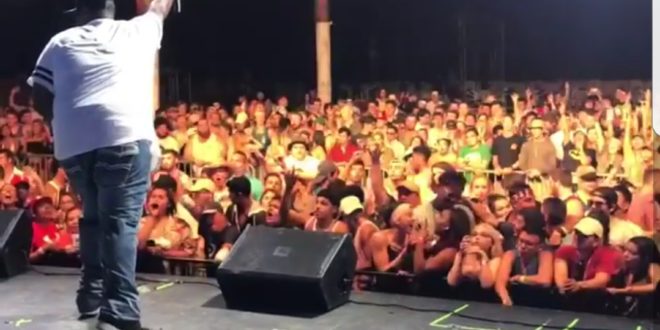 There is a NEW COMBS on the rise in Hip Hop. Inno Combs is Hip Hop artist in Orlando, FL. That is gaining momentum with his fans reaching across over 54 countries through the Spotify streaming service platform alone. Reaching from United States, Australia, Brazil, and even as far as the Netherlands just to name a few of those countries. Currently his Spotify is sitting at over 12,000 monthly listeners.

His new single “The Weekend” is currently #1 on Top 40 Independent Charts via www.spinreports.com and stayed there consistently for months with no sign of going anywhere. “The Weekend” is the best high energy hip hop track out right now to make you move, shake, and party having a great time. Its obvious to see why this single has garnered him a lot of attention.

This past year in 2017 he made some newsworthy headlines that the average new comer does not accomplish. It started when he went to the huge music festival in Austin, TX known as SXSW . While there he shared the stage with Lil’ Yachty in front of 5,000 people.
Then following that he got put on a U.K tour performing in Cambridge at Ballare Nightclub; in Canterbury at their biggest music festival The City Sound Project; and at Mirage a club in Marbella, Spain. Take a look at his 1 minute long 2017 wrap up.

Quick Bio:
“Inno Combs.” Born and raised in Brooklyn, New York, Antonio “INNO” Combs always had bold dreams of making it big in the world of entertainment and music. He spent most of his childhood attending talent and showcase events.
During the year 2000 at the age of 13 he moved to Orlando, Florida. He attended Teague Middle School. That’s where he found a passion for music. Later on in life Inno was forced into a battle with cancer at the age of 21. Though he won that battle it was a turning point in his life back into the world of hip hop. From humble beginnings, “Inno” is a young and diverse hip hop artist oozing with talent, charisma, energy, his pure love for musical originality, while at the same time offering his own distinctive style of lyrical expression.

Known for his intellect, charm, genuine personality, standout lyrical delivery, and commercial mass-appeal, “Inno Combs” is aggressively making the necessary moves unto becoming a fixed star in the Hip Hop scene for years to come.

You can download Inno Combs song “The Weekend” here fanlink.to/theweeknd

Stephen Vicino is the founder of MusicExistence.com. He created this site to give talented musicians a voice and a way to be discovered.
@@svicino
Previous Stinky Pete – Rose Potion (Pro. Young Taylor)
Next 2 New CDs and Video from The Brimstone Lab’s Newest Artist The Archetype!