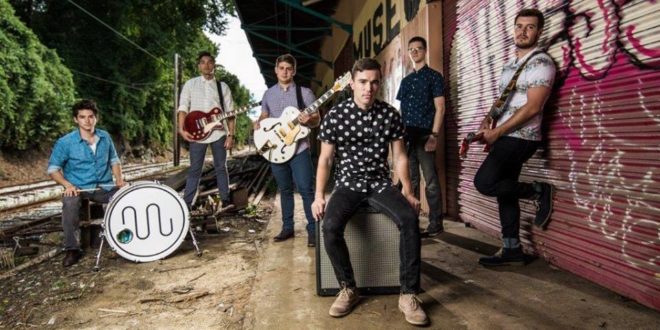 There’s a ridiculously fun sound resonating out of Washington DC courtesy of Sub-Radio, a high energy band who make smart, danceable pop rock that’s bound to have you smiling. Just in time for the holidays the sextet are taking their undeniable signature sound and making their mark with a festive EP entitled ‘Holiday Hangover.’ Featuring an original track, “Holiday Hangover,” that can be enjoyed by all and covers of Ariana Grande’s “Santa Tell Me” and Fall Out Boy’s “Yule Shoot Your Eye Out.”

When asked about the inspiration behind the project the band shared, “Holiday Hangover is the Sub-Radio version of the holiday season: a little introspection, a little more synth than sleigh bells, and a reminder that things can be fun and pure even in 2017. The inspiration for ‘Holiday Hangover’ [the song] was that feeling we’ve all had of waking up on New Year’s Day, maybe a little worse for wear, and realizing that just because it’s a new year doesn’t mean anything’s changed — about the world or ourselves. But of course we can’t do a holiday album without having a little fun, so we had to cover the New Queen of Christmas Our Lord and Savior Ariana Grande, with our own twist. We’re less sexy and more goofy than her. The Fall Out Boy song… look, we’ve just been dreaming of releasing a Fall Out Boy song since we were all 12.”

Sub-Radio’s high-energy live performances and variety of outstanding vocalists have put them on the map up and down the East Coast. The band’s clean guitars, dancefloor rhythms, and powerful vocals have garnered comparisons to established pop-rock acts like Walk The Moon and Two Door Cinema Club. Multiple songs have been recognized in national songwriting competitions, and Sub-Radio has gigged heavily across the region, playing at the Cherry Blossom Festival, Celebrate Fairfax, Firefly 2017, and more. Following the success of their 2016 debut ‘Same Train//Different Station’, the band embarked on a series of monthly singles in April 2017.

Sub-Radio are currently putting the finishing touches on their new project which the band will release in mid-2018.

Previous Quality Music Is Back!!
Next Johnnie Mikel Releases Official Music Video for Latest Single “Come With Me”