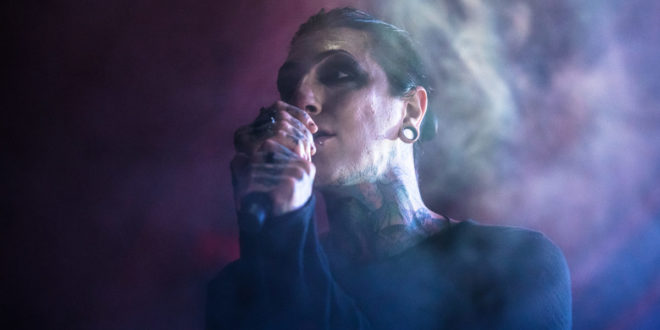 Motionless In White have announced a second leg of their North American GRAVEYARD SHIFT TOUR.  The headline dates, which will feature support from special guests Every Time I Die, Chelsea Grin and Ice Nine Kills, are set to get underway February 20th at Ace of Spades in Sacramento, CA and continue through late March (see attached itinerary).  VIP pre-sale tickets for the tour will be available, Tuesday, December 12th at 10:00AM local time with an additional Blabbermouth pre-sale beginning Wednesday, December 13th at 10:00AM local time.  All additional tickets will be available for purchase to the general public on Friday, December 15th at 10:00AM local time. For complete details and ticket information, visit www.motionlessinwhite.net.

Earlier this year Motionless In White shared their official music video for “Necessary Evil,” which is directed by Max Moore (Code Orange, Of Mice & Men) and streaming now on the band’s officialYouTube channel.  “Necessary Evil” – currently Top 30 at Active Rock radio outlets – is featured on the band’s new album GRAVEYARD SHIFT, which arrived earlier this year at #1 on Billboard’s “Hard Rock Albums” chart marking Motionless In White’s second consecutive #1 on the chart.  GRAVERYARD SHIFT is available at all DSPs and at www.motionlessinwhite.net.

Touted as one of the “Most Anticipated” heavy albums of 2017, Alternative Press exclaimed, “MIW make sure to leave no gravestone unturned as they explore the vast underworld of rock,” on GRAVEYARD SHIFT, while Rock Sound declared, “Every cut brings something new to the table…tugging at the heartstrings one moment and cutting straight to the bone the next.”  Kerrang! declared, “Motionless In White are out to prove themselves the kings of goth-punk and their leader, Chris Motionless, is ready to march them into the black.”  GRAVEYARD SHIFT features the Top 20 Active Rock hit, “LOUD (F*ck It)” and the thunderous single “Eternally Yours.”

MOTIONLESS IN WHITE ON TOUR 2018
With Every Time I Die, Chelsea Grin and Ice Nine Kills