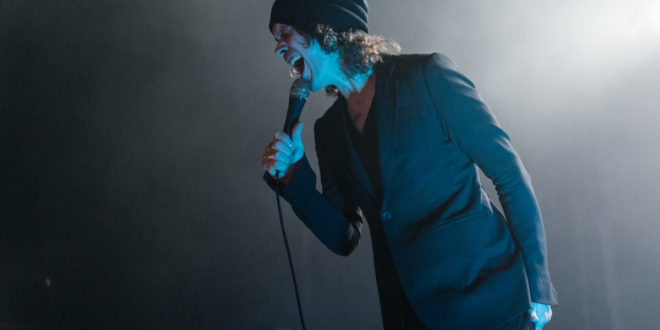 H.I.M. has been saying goodbye to their fans across North America with their Bang & Whimper 2017: The Farewell Tour and a final stateside performance here in New York City. The band has been traveling across the world, hitting multiple nations across Europe and North America, and hopefully allowing for some sort of closure for their millions of fans.

Prior to the show I was in high spirits, excited to witness the guys from H.I.M. take the stage at the Hammerstein Ballroom for the final time. But as I was getting closer to the venue, the reality of it all hit me and I was cocooned by mixed emotions. As I walked into the foyer, the surrounding crowd definitely seemed to be sharing my same nervous energy. I looked around at several people and realized we all felt the same way–wholeheartedly excited with a large side of sadness.

Ville Valo, the ever charismatic frontman that he is, carried through the songs with an  unrelenting passion. It transported me to that first time I saw H.I.M. at Bamboozle in 2006, and I found myself hypnotized once again. Watching him sing hit after hit made me realize how deeply influenced I was then, and still to this day, by their music. Alongside Valo, with a fervor just as strong, were his bandmates Mikko “Mige” Paananen on bass, Mikko “Linde” Lindström on guitars, Janne “Burton” Puurtinen on keyboards and Jukka “Kosmo” Kröger on drums. Despite it being their final show in the Americas as a unified ensemble, the guys gave it their all. At times throughout the concert Valo’s voice was impressively overpowered by the audience singing along with all their might in an attempt to seal the moment into their hearts. The gesture did not go unnoticed as the band continued on with the intent to melt the faces of the front row with unparallelled uh-mazingness.

As the setlist wound down, the inevitable was creeping closer and the crowd could feel it. The almost two-hour show was wrapping up and the post-concert blues were going to hit hard for sure. When H.I.M. walked off the stage for the last time as a unit, the faces of the people expressed what I felt: joy, grief, and exhaustion. Fans were high-fiving strangers, some were crying, some were laughing, others were drunk, but we all did realize that this was indeed the end of an era.

H.I.M., you brought us together for over a quarter of a century in ‘Joy and Sorrow’ and with our ‘Soul On Fire’  we were all ‘Killing Loneliness’ with you. Thank you.

Concert lover, music fanatic. If it sounds good to me, the rest doesn't matter.
@njaziaddict
Previous Ex-Human, The Best Album of the Year
Next Saxon unveil music video for new single, “Thunderbolt”