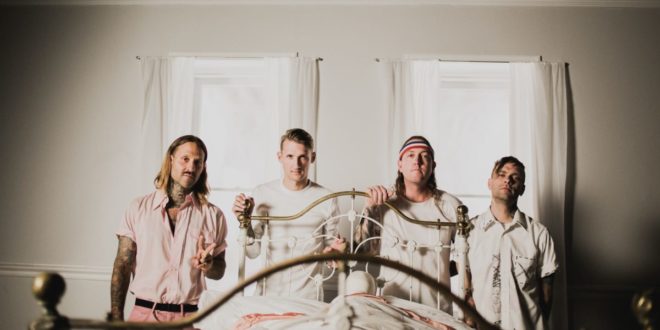 Following the release of their critically acclaimed 7th studio album “The Canyon” via Hopeless Records.  The Used are excited to announce their live return to Europe.

Tickets go on sale on Friday 24th November at 9am here.

Written out of pain and loss, “The Canyon” is tragic and haunting whilst also having a sense of light and energy that is unlike anything the band have ever done before. ‘The Canyon‘ will take fans on a lyrical journey through the intimate psyche of Bert McCracken:

“I’ve learned as an artist that a great idea is such a gift.  If I don’t stop whatever it is I’m doing, even if while driving, if I don’t pull over at that moment, then maybe I didn’t deserve the idea to begin with. I learned to respect and worship the ideas in that way, that they are and will always be something sacred. Stopping in that moment was a brand new approach for us during this process”.

Produced by Ross Robinson (The Cure, At The Drive-In), this 17- track opus was recorded entirely on tape, with no more than 3 takes being used on each song. Every musical note and vocal heard on the record was recorded entirely on tape without a click track at the legendary Valentine Studio with some songs featuring string arrangements and a choir. The process was unique and unlike anything the band has done before. They would hit record and play it as if they were on stage, without a backing track. Songs weren’t played and recorded repeatedly until the magic was gone. What you are hearing is what really took place within the recording process. Every nuance was captured and with every listen you experience something new.

Over the last 15 years The Used have released a collection of albums that have shaped the space of the alternative rock scene. High energy live shows, gut wrenching relatable lyrics, and melodies that blended pop sensibility and hard rock creating the perfect combination to make an everlasting impression on fans globally.  The band put everything into writing and recording ‘The Canyon‘ and from start to finish you are submerged into an inescapable visceral universe and McCracken leaves us with “That’s what this record is–it’s a moment of silence for what’s real”.