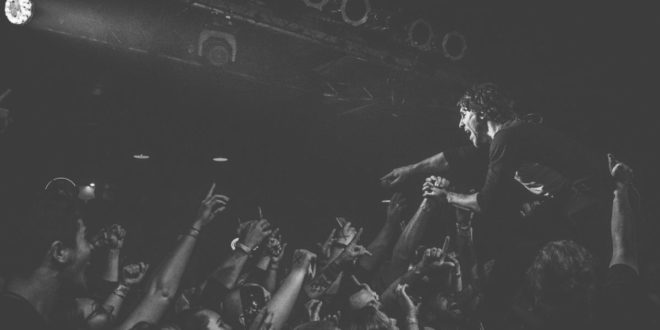 Rock band 10 Years partnered with RED in their co-headline tour across the US. 10 Years is driving support for their new record How To Live (As Ghosts), which was released on October 27th. Guitarist Brian Vodihn took time before their show in Sauget, IL to sit down with Music Existence, which can be seen here.

10 Years closed the night with a phenomenally strong performance. The band immediately broke into a groove for “Fix Me” and “Burnout.” Front-man Jesse Hassek didn’t waste any time jumping into the crowd with blue and white lights illuminating the venue. 10 years stopped mid-song during “Prey” to show the fans an overwhelming amount of appreciation. “I just want to thank every single person here who has supported us since 2005,” said vocalist Hassek. The ease back into the song was nothing short of an explosion, members jumping around stage. A sweet guitar melody rang through the shadows while a bass drum beat kicked in. “Dancing With The Dead” proved to be a personal favorite of the set, as the upbeat, catchy tune energized the crowd.

The crowd interaction remained constant throughout the entire performance. “I want to do another where you sing at the tip-top of your lungs – that never gets old.” as Hassek introduced the 2008 hit “Beautiful.” Fans did as Hassek requested, and the crowd volume almost matched the band’s as fans let loose. The change of pace  was a nice catch of breath. A marching beat and sly guitar brought on “Tightrope.” Bassist Chad Huff and guitarist Brian Vodihn synchronized as they played side by side, and both guitarists had a seemingly face off later in the song. All band members were beautifully illuminated and often silhouetted by purple and red lights.

The heaviness returned with a passionate performance of “Russian Roulette” as Hassek made his way back into the barricade, firmly gripping and locking hands with fans for support. The passion continued through “Phantoms,” a track off the new record, and a ghoulish, grunge cover of Nirvana’s “Heart Shaped Box.” “That’s the first cover 10 Years decided to recreate,” states Hassek. The band decided to recreate one of their own in a different life and tone. “Wasteland” rushed against the air like a wind breeze in its slow tempo, and did a phenomenal job bringing the track back to life. The night finished full of high energy during 10 Years’ current single “Novacaine.” Be sure to catch 10 Years on tour with Chevelle this fall and winter.