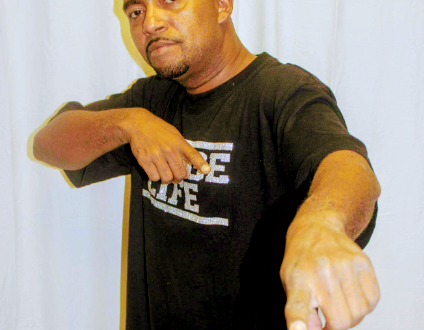 Michael Gray was born August 22, 1976 in Jackson, Mississippi. In the year of 1984 at the age of 9 years old, Michael started playing around freestyling like in his grandma’s backyard. When he was attending Bradley Elementary School he was only focused on his education. In 1994 Michael Gray turned 16 years old & that’s when he decided to take rap seriously. In the year of 2002 he was 24 years old when he had his first ever booked event. He stopped for a while because of emergency purposes. The years went by & Michael decided he wanted to start back making music. Michael B.K.A. Mike Geezyy  became a member of Straight Jacket Ent and part owner of the label and studio. He’s collaborated with artists Cenolaldy601, Duke The Truth, Jack Dangerous, P-Dog, Clicker, Bossolini, Yung Juvie and more….He always had the game deep in his veins. Stayed focused and motivated, aiming for success. He has connected with many great artists. Michael (Mike Geezyy) rocks the Mic every time he touch the Mic. When he grab the pen and paper its highly explosive.

Michael became a Supaunit(Savage Life)member in 2010 where he met lots of great teammates in the university as its known. His manager David Ransom (Savage Life) holds things down. Music is his life. In and out of studios, paving the way to unlimited success.

Stephen Vicino is the founder of MusicExistence.com. He created this site to give talented musicians a voice and a way to be discovered.
@@svicino
Previous K.Flay Announces Additional North American and European Tour Dates for 2018
Next Largest Music Festivals You Have to Visit