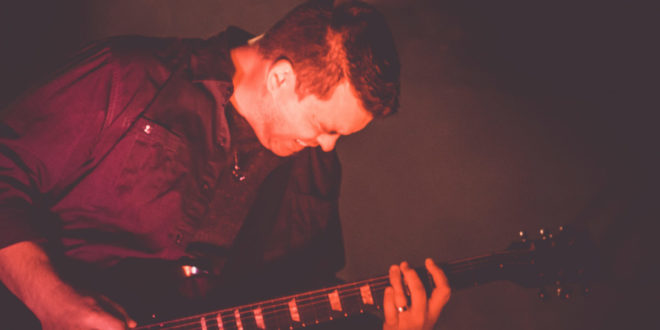 A sense of revival is always refreshing no matter what aspect of life. For 10 Years, their spirit and attitude are at an all-time high following the release of their new record How To Live (As Ghosts). Despite members weaving in and out of the band, 10 Years has found their formula and are ready to come back like never before. With the return of guitarist Matt Wantland and prior drummer/now guitarist Brian Vodihn, 10 Years have hit the road with RED and Otherwise in support of the new album. Brian sat down with Music Existence to discuss the band’s rebirth and new album How To Live (As Ghosts).

Music Existence: How’s the tour going so far with RED?
Brian: It’s awesome. We finished our album in May, and it just came out a week ago. All that time in between has been leading up to this release. We took some time at home and revamped our live show. We re-imagined a couple of songs in different ways. It’s going well. It’s nice to play a different set. We took ourselves out of our comfort zones.

ME: Congratulations on the album release, by the way! It’s a masterpiece. I know it’s more of a full band effort this time around compared to the previous albums. How did you all approach the writing process?
B: This time we literally set up pretty much like we would on stage, in our rehearsal spot. All of us there just made noise until stuff started to sound like a song. Typically in the past, it would be just me writing most of the music and whatever vocal parts I might hear, give all of that to Jessie, and be like, “Alright, do your thing.” The other guys in the band would also figure out other things on top of that, but I would start with some type of structure. This time around, I didn’t want to preconceive ideas. I wanted to see what would happen if we just got in a room and started. The line up is different now, and that really contributed to our ability to do that. In the past, the people in the band at the time… we weren’t able to write as a band. It just didn’t work. Now, it does, and we’re all refreshed. It worked just to make a bunch of racket and noise until somebody did something that made everyone go, “Hey, that!” Once we got a starting point, the songs started really quickly.

ME: Why do you think there’s that sense of comfort there this time?
B: Everyone now is a capable musician, and everyone is a capable writer. In the past with the different line-up, we would basically try to write as a group, and within an hour we’d be in a fight. The dynamic didn’t work. This particular dynamic does.

ME: It really does, and it shows. I do want to ask about a couple of inspirations of songs that stuck out to me. “Burnout” being the first one. Is that somebody in particular that passed away, as there’s been musicians in the limelight that have passed on?
B: It’s about somebody in particular, but not somebody that has passed away. It’s just someone who we know in the band… what that song is basically getting that is about someone who had every opportunity in the world right in the palm of their hand, didn’t see it, and let it all slip by. I guess to use the old saying “shot themselves in the foot.” It’s really just a missed opportunity.

ME: What about “Lucky You?” I love the sarcastic fire behind it.
B: That one is about how we second guess so much. There’s a line in that that says “Be careful what you wish for.” There’s almost like two sides of second guessing. One person entering into something with somebody and they’re totally unsure, but willing to take the risk. Then another person who also doesn’t realize it maybe, but they’re also taking a risk. That one is pretty personal to Jesse, so it’s tough for me to really elaborate too much. But it’s just about fears, commitments, and things like that.

ME: The band had an opportunity to play Shiprocked in 2016. I apologize, but I don’t know if you came back to the band at that point. (Brian nods at this point.) How was that experience?
B: I’ve done Shiprocked twice. I was not on that one but several years ago. Shiprocked is crazy. First off, you’re on a boat with all of the fans. When you go to eat at the cafeteria, everyone is there. You have to immediately understand the dynamic, which is: Everyone hanging out and having fun. The problem with that though is, I don’t drink anymore. It’s been nearly 5 years since I’ve had a drink. But back then when I was drinking on Shiprocked, everybody is like, “Hey! Shots!” and it’s like 10 a.m. (laughs) Everyone wants to buy you a shot. You have to really be aware of yourself and attempt to keep it together. But really, it’s a great time. It’s fun… obviously beautiful scenery. You’re getting to play and hang out with a bunch of different fans. You get to connect with your fans in a way that you don’t get to just touring and playing shows normally. Even if we meet fans after shows, it’s a really quick handshake, “Hey, how you doing?” It’s not like, “Hey, we’re trapped on a boat together. Let’s hang out all night.” Shiprocked is really fun. I would definitely enjoy doing it again.

ME: Do you think the guys would, too?
B: I think so. But I think we all share that exact same sentiment of “Oh, God.” Like, let’s make sure we don’t lose our minds.

ME: Ah yes, the preparation. (laughs) What are you listening to right now?
B: I know this sounds dorky, but I love film scores. I’m one-hundred thousand percent obsessed with the Interstellar Hans Zimmer film score. I’ve been listening to it on repeat. In fact, I’ve watched that movie probably like fifteen times lately. Just because of the connection to the music. I’m not super into anything new, really. I’m trying to be, but I tend to lean on my classic albums for me. Tool, Incubus, Deftones, Nine Inch Nails. I think I’m still stuck in the past, but it’s nostalgia.

ME: What would be a dream tour to be apart of since the band is usually collaborating with other bands on the road?
B: All of those bands I just mentioned. Nine Inch Nails, Tool, A Perfect Circle, Incubus, Deftones… all of those bands are bands I wanted to tour with as a teenager, and I still do. We actually had the chance to tour with Korn and Deftones back in maybe ’06 for the Family Values Tour. That was crazy. Literally half of the bands on that tour, I had stickers of on my car when I was in high school. I still stick with those bands, because they’re all still doing it.

ME: What’s one philosophy you live by on a day-to-day basis?
B: In 2013, I left the band and stopped touring. I still produced, wrote, and recorded the album after that, but I stopped touring because I didn’t love it anymore. One of the things I do generally live by is love what you do and work hard. At that time, the band wasn’t playing well, and I wasn’t happy on the road. My wife really encouraged me to get back out. It was blatantly obvious being at home for a while, that this literally is my entire existence. Music is just what I do. Now that the line-up is different, and we’re getting along really well. It’s fun again, and it feels right. You live once, right. We all have friends that have suddenly passed away, not to sound morbid. The truth of the matter is, we have a limited time on this Earth. You’ve got to do what you love and puzzle piece shit together to make that happen. It’s so easy to make excuses for everything. I’ve done it, we’ve all done it. We were talking the other day on the bus. Kyle, who is our drummer, he came into the band much later. I started in the band in 1998. I was 16. I’m 35 now, so it’s literally almost been 20 years that this has been my life. We were just normal kids from Knoxville, TN. If normal kids from Knoxville, TN can figure out how to get a band signed to Universal Records, write a number 1 song, and tour the world… not to sound cheesy, but a lot is possible in this world. You just have to make it happen. Love what you do and work your butt off.

ME: I totally agree. What’s one goal you hope to achieve by the end of next year?
B: To be honest with you, since this record just came out, there’s a lot of momentum behind it. We now are on Mascot Label Group. They’re giving us more of a push and more love and support than any label we’ve ever had. My goal would be to start to really develop our following in Europe and overseas.

ME: Brian, thank you for your time. Can’t wait to see you and the guys on stage.
B: Thank you!

10 Years just finished up their tour with RED, and is ready to embark on a tour with Chevelle. Catch them at one of the dates below:

Kitchen Designer by day, Concert Photographer/Writer by night. 24. Arkansas.
@tsheaphoto
Previous Gallery: Royal Blood at the Manchester Arena 16.11.2017
Next Gallery: The Hotelier at The Firebird in St. Louis, MO on 11.13.17