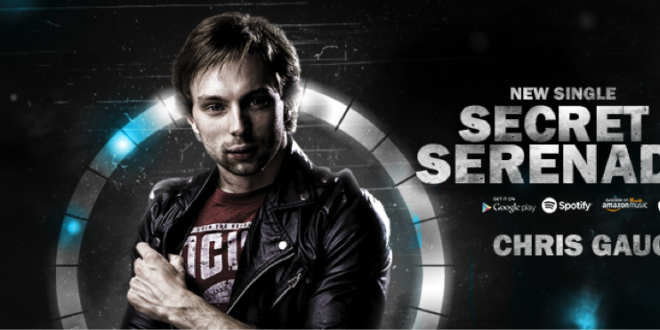 “Secret Serenade,” the electrifying debut single from rising artist Chris Gauger, is catching the attention of power pop fans across the globe. Released recently as the lead single from his forthcoming self-titled EP, the smooth, yet powerful track is quickly growing in popularity on many major online platforms, gaining steam with both social media and music streaming providers.

Beginning with a moody sequence of deep bass pulses and mechanical echoes, the track quickly ushers in an array of smoothly-produced electronic beats and synthetic sounds, bouncing back and forth in a dark, contagious rhythm as Chris smoothly sings his way through eerie harmonies and a soaring pre-chorus. Building its way through heartfelt lyrics with soulful vocals and an ever-growing sense of tension, the song reaches a peak as it breaks into a powerful chorus of rock-inspired guitars and heavy sub-bass. A lofty guitar solo punctuates the track’s bridge, winding through a unique mix of electronic pop and a heavy dose of hard rock, before crashing down into a powerful final chorus section to finish out the song with a rugged edge.

Providing an engaging variety of bass-heavy pop grooves and hard rock guitar chords, “Secret Serenade” is the modern-day cure for the sterile pop music that saturates today’s airwaves. Both the composition and nature of the song utilize a strategic blend of organic and synthetic styles to make this track an instant favorite. “Secret Serenade” is available across all major streaming platforms and digital music distributors, including iTunes, Spotify, Google Play, and many more.

Chris Gauger, the 24-year-old Nashville native causing a stir in the local pop music scene, is already creating a buzz in the music world that can be heard from miles away. The former rocker-turned-pop-singer’s debut single “Secret Serenade” has begun turning heads around the globe ever since the track’s release, blasting its way onto all major music distribution channels and streaming services, and even finding itself an impressive amount of radio and internet airplay for an independent artist to obtain.
Chris commands an undeniably larger-than-life presence from the very first moment he begins to sing. Smoothly combining his skills as a pop music crooner with a gritty edge of hard rock influence and heavy metal guitar playing, he creates an instantly unique sound, the like of which pop music has never before heard. After spending years honing his craft as a hard rock guitarist and singer in bands and recording studios around the greater Nashville area, Chris is turning heads with his own solo career, the result of the versatile artist’s decision to leave all former conventions and endeavors behind to set out on his own.
Gaining more steam as he amasses new popularity every day, thanks to quickly growing success on internet radio and all major digital music platforms, Chris is undoubtedly a powerful force to be reckoned with in today’s stagnant music industry, bringing new life to pop music, new attention to rock and the dying form of heavy metal, and powerfully impacting fans of everything in between. An instant favorite with the whole world in front of him, Chris Gauger is definitely the rising star to watch out for in music today.

Stephen Vicino is the founder of MusicExistence.com. He created this site to give talented musicians a voice and a way to be discovered.
@@svicino
Previous Album Review: Epicenter – Subversion
Next BLACK VEIL BRIDES RELEASE NEW SONG “WHEN THEY CALL MY NAME”