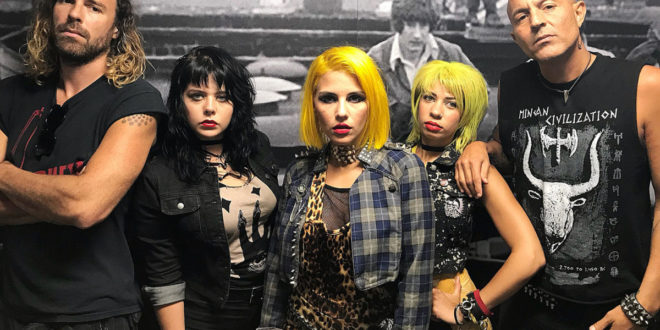 Underground rock has amassed hope in Barb Wire Dolls, an emerging Greek quintet signed by the late great Lemmy Kilmister of Motorhead. What solidifies the band’s legacy today is a tribute in music video form, that of their single “Fade Away” (off Rub My Mind). Its release coincides with the two-year anniversary of the shooting in Paris’s Bataclan theater, which has gone down as Europe’s worst terrorist attack in a decade.

Due to the tragedy on the night of November 13, 2015, “Fade Away” almost never came into being. Barb Wire Dolls vocalist Isis Queen expounded on this process, noting the approval from Eagles of Death Metal touring guitarist, David Catching:

“After the Paris Attacks, we wrote David [Catching] and told him, apart from our most sincere condolences for what had happened, that we understood if he would not want us to come in and record at his studio after such events,” “But he immediately replied, ‘the music must go on, they can’t take that away’…”

With equal immediacy, that sentiment was realized once Barb Wire Dolls recorded the bittersweet single at Catching’s own Rancho De La Luna, where plenty of sentiments—and tears—flowed.

The music video for “Fade Away” saw initial premiere via Loudwire. Regarding its context, the band dedicates the video not only to the Bataclan victims, but also those who were amid the attacks of London, Orlando, Las Vegas, and Columbus. This mission, aside from carrying unbridled and earnest rock and roll, emphasizes a community of genuine compassion and collaboration worldwide.

I come from a family who is passionate about all things music. I learned to sing at an early age, and by 13, had my very own Fender Strat guitar. I tried my hardest at learning all that I could. Because I was born with cerebral palsy, I had to teach myself an adaptive playing style. I learned to write and record my own music, despite these difficulties. In college, I started making great use of my writing abilities by reviewing music, as well as copy editing. I guess it's best to stick with what you know, while welcoming a fair challenge at the same time.
Previous Gallery: Superjoint at The Culture Room , Ft. Lauderdale, FL 10.18.2017
Next Baby Raptors reveal Lost Boi video