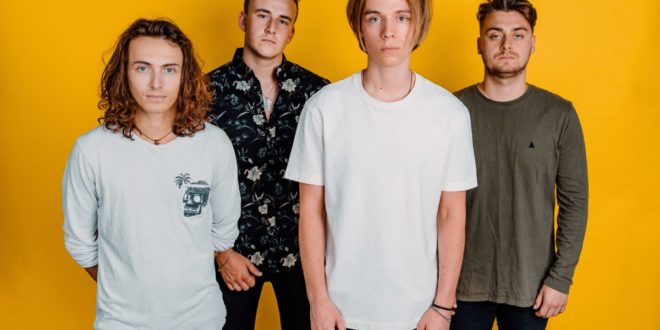 Easy Life Records’ (Lower Than Atlantis, Waterparks, Arcane Roots) latest signing Sun Arcana recently began a new chapter in their career, revealing the anthemic new single Wonderful. Vocalist Tom Harper-Ward said of the new track: “We chose ‘Wonderful’ as our first single because we felt it was important to start with a bang. After we came up with the opening riff at rehearsal, we knew straight away that it had to be a massive song with huge riffs everywhere. We’re particularly excited to play this one live. We filmed this video up in Manchester with Rolling Vision, who are an incredible team and have worked so hard on all our upcoming videos as will all become apparent. With this video in particular, it was important to keep up with the high energy of the song and we thought they absolutely smashed it for us. Although I must admit, after filming it took me a few days to recover due the amount of takes we did. Probably has to be the least rock n roll thing to say, but I had a neck ache for about a week after”

Hailing from Essex, Tom Harper-Ward, Ryan Daniels and Harry Acreman dabbled with various musical projects as teenagers. However, they were brought together by a collective vision to create full-throttled, heavy music which had the melodic appeal to a broad audience. Joined shortly after by Jules Wildblood on bass after crossing paths with him at University, the line-up was complete and SUN ARCANA was born.

“We want our sound to really represent how we write. Prior to Wonderful, we would often record and find that the music wasn’t representing us. We like to think of our live shows as big, full of ballsy riffs and an overall rocky anthemic sound, but our old recordings were too tame. Now we are aiming for that big, in-your-face sound” says Harry Acreman, guitarist for the band.

The band name touches on the mythology behind Tarot cards, with Arcana referring to mystical secrets and the Sun radiating light – referring to optimism. It’s partly a reflection of the band’s positive outlook on things to come.

21st November will see Sun Arcana take to London’s The Finsbury to celebrate the release of Wonderful.

Admission is free via Dice FM, and support comes from Oceans and Echoic. Admission to the show however does require RSVP, which you can do HERE