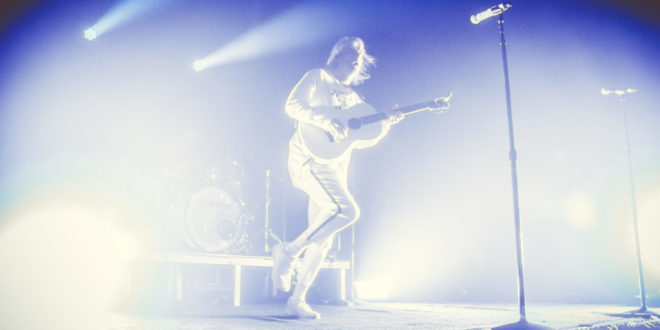 Judah & The Lion brought the folk, rock and R&B fused tunes to the Ozarks October 25th in Little Rock, AR at the Metroplex. The band is embarking their first run on their “Going To Mars” Tour promoting their second full-length album Folk Hop N Roll. The band is making their mark with the youthful, cinematic experience during the live show.

Judah & The Lion let their sense of humor shine from the get-go, covering and dancing to T-Pain’s “Booty Wurk” as their intro. Hands were immediately in the air as the crowd left their feet, and the performance made for a promising night as the band danced and moved across the stage. The set followed with passionate performances of “Twenty-Somethings” and “Southern Ground.”

Taking a step back after photographing the band, it was clear that the band’s stage set-up was simple yet complimenting. Screens flashed between yellow and red lyrics and animated faces of the band. “Conversations” proved to be a crowd favorite, fans cheering wildly as the dancing continued. A giggle escaped as my eyes scanned across the room. The band was even boyfriend-approved as guys were nodding along to the music as they stood with perfect posture and arms crossed. “Man, this is going to be a fun night,” said front-man Judah Akers. He continued, “We wrote this next one hoping you would dance to it,” and the room fell pitch black. “Reputation” erupted with orange flashing lights and clapping. The crowd had a blast chanting back “Hey!” into Akers’ second mic, which provided an altered pitch. The fast paced dance tune kept the energy through the roof, and a sense of comfort-ability rushed in, almost like a dance slumber party. Akers playfully ended the track by covering his face with his shirt.

A sweet guitar ring shook the venue for the pinch of nostalgia with a killer (ha, get it) cover of “Mr. Brightside.” A special twist of drum emphasis caused fans to scream while banjo and mandolin players Nate Zuercher and Brian Macdonald had a face-off. Judah & The Lion did a phenomenal job of making the track their own. Sweet falsetto “oohs” captivated the crowd before drummer Spencer Cross jumped out of his seat, finishing the cover off with a bang. Singer Judah Akers was illuminated in cobalt blue when he grabbed his guitar and shouted “Y’all feel be?!” The band burst into a grand jubilee for “Back’s Against The Wall,” and I swear these guys are musical geniuses. Each piece is so carefully layered, yet they make their performance seem so effortlessly while having fun doing it.

The night continued with hits “Suit and Jacket,” “Stockholm,” and “Take It All Back” as fans lived in the moment, squeezing every ounce of energy from the band. Judah & The Lion hands down puts on one of the most passionate performances to date. From the crowd interaction to band introduction to performance rating, it’s hard to find a thing out-of-place about their show. The euphoric sense of being carefree and alive transmits through their songs, and they have a way of making the crowd feel like something special.

These guys are truly something special. Be sure to check out the dynamic band that is Judah & The Lion on the remaining of their “Going To Mars” Tour, throughout Europe and the US this winter and next spring.

Grab tickets to the “Going To Mars” Tour here.