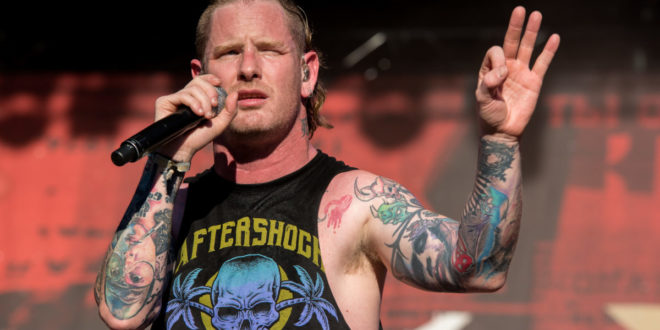 Photos of Stone Sour at Aftershock 2017.

All photos taken by Luke Spencer

Currently on tour promoting their latest album Hydrograd, Stone Sour took to the main stage on day one of Aftershock in Sacramento, CA.  Filled with confetti and inflatable tube men, the band performed many of their new songs along with encouraging as much headbanging and singing from the crowd as possible.  Click on any photo below to open the gallery and scroll below the photos to watch an interview with Corey Taylor discussing America 51 as well as the music video for their song “Rose Red Violent Blue (This Song Is Dumb & So Am I)” featuring Steel Panther.

I am an album reviewer, band interviewer, concert photographer. At least once a week I review a new album in the rock genre the week it comes out (anything from alternative to metal). Check out my site at www.rockedreviews.net and my twitter feed @rockedreviews"
@http://www.twitter.com/rockedreviews
Previous Alt-Rockers 9ELECTRIC Reveal Powerful Music Video for “Beautiful”
Next The Yada Yada Yadas Debut New Video for “Oceans”