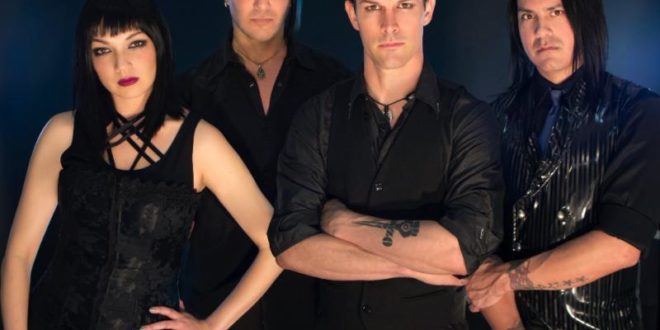 Electronic alt-rockers 9ELECTRIC recently wrapped up their North American “Life is Beautiful” headline tour supporting their latest single, “Beautiful”, at radio. Today, the band is following up with a brand new music video for the track, which focuses on breast cancer and suicide prevention/awareness. Completely self-directed, produced and filmed by 9ELECTRIC, the “Beautiful” video is a tribute to all those suffering with a terminal diagnosis and/or depression, urging them to stay strong and keep fighting. The video stars a close friend of the band, Miki Black, who was fighting breast cancer during the filming of the video but has since become a survivor.

In conjunction with Breast Cancer Awareness Month, Alternative Press is premiering the music video alongside exclusive statements from 9ELECTRIC vocalist Ron Underwood and Miki Black discussing the making of the video and the heartfelt, moving process of filming a video that hit so close to home for both of them. Watch the powerful new video and read full statements here.

“Through my lens, I watched as [Miki] purged her frustration and so much sadness. I filmed her standing face-to-face with her fears, face-to-face with her own mortality… and in the darkest parts of the shoot I was reminded of how far I’d come through my own battles with alcohol. There was so much of this production that was therapy for us both, and I was blown away by the process… This video isn’t just about cancer. It’s also about addiction, and it is about losing oneself,” explains Ron Underwood in an excerpt of his full statement to Alternative Press.

In her statement, Miki Black adds, “I have been a fan and friend of 9ELECTRIC for years, and Mikey [Lopez, guitarist], was actually my roommate throughout part of my battle with cancer. When he first approached me about the “Beautiful” video, he just wanted to hear my thoughts about how “real” the treatment read. I opened the email, began reading it and couldn’t even get halfway through. The content hit so close to home that I couldn’t face it… but I actually found myself feeling really comfortable about the video. Why? Because I realized that my journey ended the exact opposite as the girl in the video – but it could have ended just like hers.”

To learn more about suicide prevention, or if you are feeling depressed and are in need of help, visit suicidepreventionlifeline.org.

For tips on how you can join the fight against cancer and to learn more about research, visit www.cancer.gov

“Beautiful” is cut from 9ELECTRIC‘s latest album, The Damaged Ones (Century Media). The Damaged Ones was co-produced by Micah Electric and Kane Churko (Ozzy Osbourne, Papa Roach, Five Finger Death Punch) and is available via iTunes and Amazon. The band has toured with the likes of Drowning Pool, Otep, Lacuna Coil, Butcher Babies, Gemini Syndrome and more.

Fresh of the release of their new single “Unstoppable” last month, alongside the announcement of …