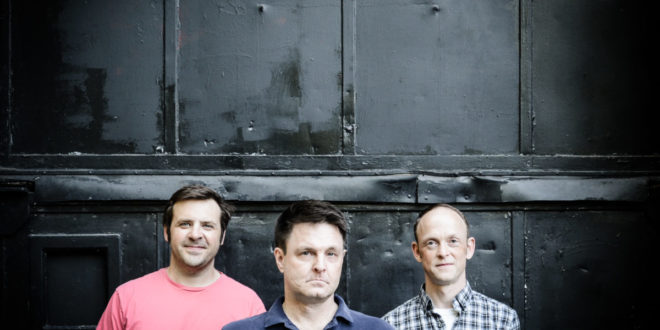 The Persian Leaps encompass a journey of patience and humility, but among any contending descriptor, persistence. Their mastermind, singer-guitarist Drew Forsberg, scribbled the phrase down in his Greek Archaeology notebook, simply hoping to one day write music under that name. Some 20 years later, Forsberg finally realized a band permutation of his idea. A three-piece by the constancy of founding drummer Michael McCloskey and current bassist Adam Brunner, the band shows great promise. Early coverage of their Praise Elephants EP in the prestigious NME magazine has earned them steady success, that is bolstered by a seasoned channeling of acts like Teenage Fanclub, Guided by Voices, and the Smiths. The band’s output has remained equally consistent, Bicycle Face marking their latest EP, and fifth within a span of five years.

I caught up with Drew to discuss his early experiences with music and forming the Persian Leaps, the creation of Bicycle Face, as well as what the band plans for the future.

ME: Even though you’d been writing songs consistently for a number of years, had Persian Leaps only come together since 2012?

Drew: Yeah. I think sometime in the late 90s, I bought a four-track recorder and started recording some of the songs that I’ve been working on. Then as computer software became more available, I used various options there. I didn’t really do anything with it. It was kind of more for my own fun and sharing with a few close friends, and that was about the extent of it.

But around 2010 or so, a friend of mine from college and I were talking about doing something together musically. He and I and another guy started a band, and were together for about a year. We played some of my songs, and the rest covers, more or less. That got me back into music and wetted my appetite. Once the guys got too busy, I wanted to keep doing it, and that was the point at which I decided to find other musicians to work with. So, around 2012, I found Michael McCloskey and some other people, and just got started.

ME: When I first heard your music, two influences that resonated instantly were Guided By Voices and Teenage Fanclub. Then by coincidence, I noticed they are listed on your Facebook page. Were you big on those guys back in the day?

Drew: Absolutely. Those are two of my favorite bands. When people ask about the influences on the band, I’d always mention those two as well as the Smiths. I think we’re lyrically more influenced by the Smiths rather than musically.

ME: Going back a bit further, what was it that influenced your musicianship in general?

Drew: One of my earliest [musical crushes] when I was in grade school was these two Simon & Garfunkel records that my mom had. I’d just listen to those over and over again. I absolutely loved them, and wore both vinyls completely out until they couldn’t be played anymore. That was the first time I remember being passionate about music. My mom and her mom are both pretty musical people, so I was always around people who played guitar and shared the same passion.

ME: Now, in Persian Leaps, would you say that your musicianship and chemistry is pretty solid?

Drew: Yeah! This particular lineup has been around for the past three releases, basically — three years, essentially. I don’t want to say it’s the best lineup, or maybe it is, let’s say (laughs). We’ve had the same drummer all along and we started off as a four piece. The various lineups that we’ve had have been good and bad, but when Adam Brunner joined the band three or so years ago, he just fit so well musically and personality wise. That was the point when we really started to gel. It was a transformative moment for us.

ME: How did it feel to have Praise Elephants covered by NME?

Drew: That was amazing (laughs). It was completely unexpected and we fell backwards into that, to be honest. There was a freelance journalist in the UK who had his own small music blog. I sent him a submission just hoping to get coverage. Unbeknownst to me, he also contributed to NME, and liked the record so much that he wanted to write about it there. All of a sudden, I get this email from this person in the art department at NME, asking for the cover art. I thought that maybe it was a practical joke or something at first (laughs).

ME: That’s pretty surreal, because I bet a lot of artists from your formative years were also covered in the same magazine.

Drew: Yeah! We were never able to capture their attention again (laughs), but it always feels good to have that clipping off there.

ME: Bicycle Face is your fifth and latest EP. Can you tell me a bit about how that was created?

Drew: Sure! We pretty much had the same process for all of our EPs, at least the last four. We just kind of fell into this groove of recording the five best songs that we had available to work together over the winter, and then releasing them under five song EP the next fall. With Bicycle Face, we have the same studio owner and mixer, Neil Weir. It’s a comfortable rhythm and relationship. With this EP, I felt the songs we collected to go on that were some of the strongest, maybe more so than the other EPs. I felt really proud of what we’ve accomplished.

ME: From Praise Elephants onward, Neil Weir has been a constant force in the mixing process, as you mentioned. What’s it like working with him?

Drew: We have a great relationship, and he’s very easy to work with. He’s not a producer in the sense of telling us how our songs should sound. He’s easy-going, supportive, and basically knows what we want to get out of the recording sessions, and brings out what we want to hear. It’s just turned into this great relationship that we’ve maintained for about four to five years now.

ME: With Bicycle Face, do you feel your sound in its present form is as good as it can be?

Drew: Absolutely! I feel like the songs are the most cohesive collection that we put out so far. I’d say that the cover art might be my favorite next to High & Vibrate. I’m really proud of how the art, the music, and the whole thing came out.

ME: How does the cover art come about?

Drew: You know, I usually have a concept for the album art, and for the last three years we’ve had Jon Hunt bring it to life.

ME: What next as far as music? Are you thinking of releasing an album, or just EPs for the long run?

Drew: (Laughs)! Having done five EPs in the course of five years, it was a good rhythm for us. But I think we’re at the end of that glorious five-year plan. Next year, we’re going to release a compilation, or best of, that catches up with the Persian Leaps. It’s going to have a new single that we recorded this past summer, as well as our two to three favorite songs from each of the EPs. I’ll probably be doing remixing and re-recording for some of the songs. After that, I have a full album worth of songs that I really want to get out there. So, I think a few years from now, we’ll try to release a full-length album.

Drew: Thank you. Buy all our EPs (laughs)!

I come from a family who is passionate about all things music. I learned to sing at an early age, and by 13, had my very own Fender Strat guitar. I tried my hardest at learning all that I could. Because I was born with cerebral palsy, I had to teach myself an adaptive playing style. I learned to write and record my own music, despite these difficulties. In college, I started making great use of my writing abilities by reviewing music, as well as copy editing. I guess it's best to stick with what you know, while welcoming a fair challenge at the same time.
Previous Gallery: Between The Buried And Me at The Catalyst in Santa Cruz, CA on 10/06/2017
Next Gallery: Paramore at Boston Opera House, October 7, 2017