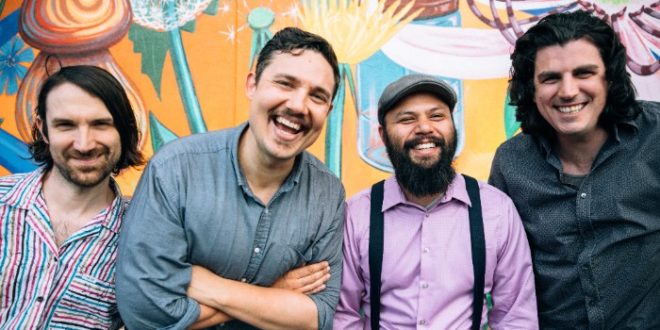 On TJ Kong & The Atomic Bomb’s new album out October 13th ,Dancing Out The Door, The band sees itself presenting traditional Americana music in a very dark way, interspersing songs with spoken word and instrumental short tracks that conjure up both light and evil.

“Mulholland Drive” starts off with a rattle and a great bassline with a touch of twang. Lead singer Dan Bruskewicz’s voice is a mix of country and alternative, which suits this particular track perfectly. What may seem like an ordinary day on Mulholland Drive turns into something more sinister as Bruskewicz sings about how “a man’s in the garden with a jar of gasoline/and the Sunday New York Times.” And while this might seem like a normal image, it takes a reverse spin on the chorus with lyrics such as “you know it’s not the 4th of July/But the smoke is in your eyes/and the sirens are climbing/all the way to Mulholland Drive.” Like a dysfunctional version of The Monkees “Pleasant Valley Sunday,” the tune presents a different picture to the beauty one might associate with what seems like a perfect life and community. It’s one of the most memorable songs on the album, veering away from a more commonplace country feel and digs deep to capture a haunting view of perception.

With an energetic bouncy feel “California Basement Blues,” is full and epic with Bruskewicz coming across as an Americana Billy Joel, putting a retro spin on it that punches up the tune. The lyrics here are the best you will find on the LP, visual and poetic such as the opening line “when I woke up she was dancing like a stray dog in the night.” There’s also a use of non lyrics to fill in the gaps of the song where words would normally be which adds an interesting aspect to the tune. Even though the title of the track seems straightforward, it actually references something more seedy, “You asked me my name and I’m wondering if something here ain’t right,” Bruskewicz sings, peeping in through a keyhole on something he shouldn’t be viewing. A true singer/songwriter story, Bruskewicz tells a twisted tale with imagery that is sharp and mixed with a rock n’ roll feel making it a track not to be skipped.

The best track on the entire LP is one that is very simple in terms of lyrics, has a catchy melody, and once again plays the throwback card. With shades of The Beatles and Roy Orbison it all comes together to form what one could describe as the most radio friendly tune on the record. “They said you were there/long black dress/and they said you were there all night,” serves as both chorus and verse and the blending of the two helps make the song structure unique. The repetition of the line never gets tiring as it is so charmingly delivered. There are some dark vibes to the song, but the upbeat melody almost makes one pass right over it. Unlike anything else on the album, it stands out, especially with its delicious instrumental break. Not only is the best song on the album but it’s one of the best songs this reviewer has heard in 2017.

There are a few moments on the LP that bring the whole package down a notch such as “She Don’t Keep Time,” which really isn’t memorable in a sea of better songs, and the last track “Soul Asylum” which drags on too long at nearly five minutes. However Dancing Out The Door is ambitious, fun, and twisted and will make you look at Americana music differently. The fact that it is released on Friday the 13th only makes the whole listening experience that more enjoyable.