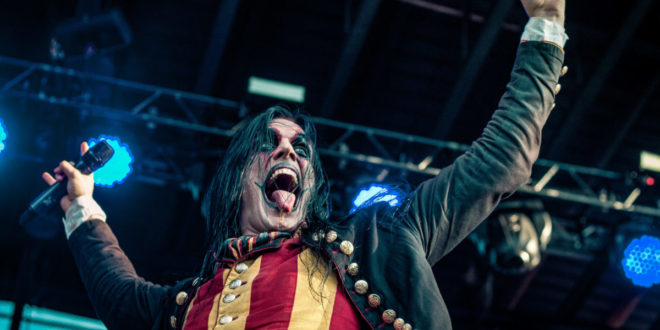 Last weekend Swedish metal band Avatar brought a freak show to KATTFEST that everyone loved and enjoyed at the Zoo Amphitheater in Oklahoma City. Following Gemini Syndrome’s set, Avatar put the pedal to the metal as they begun with synchronized head banging into crowd favorite “Hail The Apocalypse.” The seven song set hammered down with “Paint Me Red” and “New Land.”

An interlude of sweet guitar was brought on before exploding into “Bloody Angel” where fans immediately broke into head banging. Both guitarists Jonas Jarlsby and Tim Öhrström gathered front and center for a bubbly grunge face-off. Soon after, front-man Johannes Eckerström sneakily made way behind both guitarists, and all three teased fans with brief pauses in the music. The egging continued on while the crowd begun to heavily chant for “The Eagle Has Landed.” Eckerström waved to the marching beat, and the track finished with an intense and heavy musical ending.

“It’s kind of warm out here,” stated singer Eckerström and proceeded to pretend to take his vest off. “But we like it hot, don’t we?,” he continued. “Let’s start the fire.” What sounded like a country influenced metal, if you could imagine, filled the speakers for fast paced track “Let It Burn.” The song was infectious and hard not to head bang along to. Eckerström continued the crowd engagement, as he said, “I need you to move… sound… smell like a freak show. It’s time to do your best, or your very, very worst, to smell like a freak show.” Fans went wild for the final track of the night by Avatar, and the full band bowed to waltzing/circus music at the end of their performance. The band continuously thanked Oklahoma for the warm welcome and promised to be back soon.