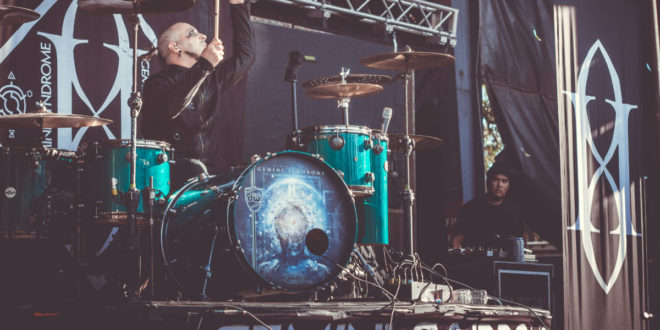 While passing through on their tour with Fozzy, Gemini Syndrome stomped the grounds of Oklahoma City for Kattfest 2017. The Zoo Amphitheater filed in prior to the six song set, which was delivered with high energy. “Pleasure and Pain,” “Zealot,” and “Eternity” got the crowd fired up.

Leading into “Anonymous,” front-man Aaron Nordstrom stated “I don’t care who you voted for, what God you worship… You are all of us. We’re here right now.” Drummer Brian Medina loved the crowd’s energy, smiling and making playful faces at the audience while the rest of the band rotated around the stage. The amphitheater was the perfect setting for the day. Though slightly warm for an October afternoon, fans were plenty alive and proved so to singer Nordstrom as he said, “Show me you’re alive.”

“Remember We Die” played as a crowd favorite, followed by an outstanding performance of “Stardust.” Nordstrom got the crowd clapping along, the lawn morphing into a sea of hands. Guitarists Meegs Rascon and Max Georgiev had a face off for the bridge, building up the perfect anticipation for the set finale.