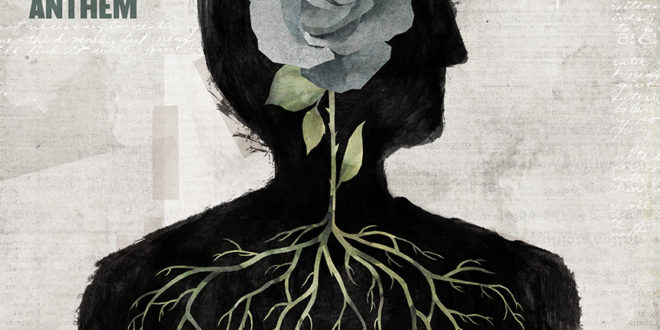 This week sees the release of August Burns Red‘s latest album, Phantom Anthem. After their previous record, Found In Far Away Places, earned them a Grammy nomination in 2015, this offering has a lot to live up to. It doesn’t seem to disappoint, boasting song after song of melodic guitar riffs and bass lines combined with metalcore breakdowns and harsh vocals.

August Burns Red must have put a lot of work into this record, considering every song isn’t too shy of the five minute mark, and a couple even reach beyond that. As a result, Phantom Anthem is an album which demands attention. You can’t halfheartedly listen to any one track, as that would mean you miss the intricacies of its production, writing, and composition. Even on a more basic level, the lack of clean vocals means more focus is needed to decipher the lyrics.

“King of Sorrow” kicks off Phantom Anthem by demonstrating the band’s ability to weave melody through all of their different instruments working together, making up for any tune lost without clean vocals. “Hero of the Half Truth” has guitars carrying the song.

“The Frost” is an appropriately named song, bringing a brighter, sharper song that embodies the feeling of frosty weather.

“Invisible Enemy” is the hard-hitting and heavy lead single from Phantom Anthem. The music video for this particular track is unusual but incredibly fun; the band performs as marionette puppets which have been intricately designed to be as accurate to the real thing as possible.

“Coordinates” is possibly the closest we’ll get to a slow-paced, sensitive song from this album. “Generations” follows it with a break from Jake Luhrs’ screaming to replace it with some spoken verse. Its culmination is what really makes this track special; it’s clarifying and refreshing, and a complete contrast from its initial angry beginning.

Listening to Phantom Anthem is an experience, and a feat which should not be taken lightly. Personally, I like to listen intently to a song’s lyrics and message, but find it difficult to decipher screaming at times. And when clean vocals are few and far between, it can feel like somewhat of a chore to get to the stage where I can enjoy a metalcore album. August Burns Red have managed to bypass that feeling by making the instrumentals themselves as interesting as their lyrics.

Their lyrical skill hasn’t suffered, though. “Invisible Enemy” speaks of very personal fears; “the uncertainty is what’s truly terrifying.” Meanwhile, “The Frost” deals with existential matters; “I discovered the cure for my misery by spending time with the unforgiving.” Their songs still convey meaning and purpose to those who listen, while their backing track ties everything together to create well produced, balanced pieces.

August Burns Red might not be the best gateway band to get into metalcore, but they’re certainly fine examples of the genre. Even without being well-versed in that particular musical styling, it’s easy to see that they’re skilled, dedicated musicians.

Give Phantom Anthem the time and dedication it deserves, and you’ll find it a damn good listen.

Watch the video for “Invisible Enemy”:

Pre-order the album on their official site.

Freelance arts, culture, and music journalist. Lots of words and some radio. Studying for an MA in Media and Journalism. Trying their best.
@lozreviews
Previous Yoke Lore Debut New Music Video for “Goodpain”
Next Gallery: Andrew W.K. at The Independent on 09/27/2017 in San Francisco, CA