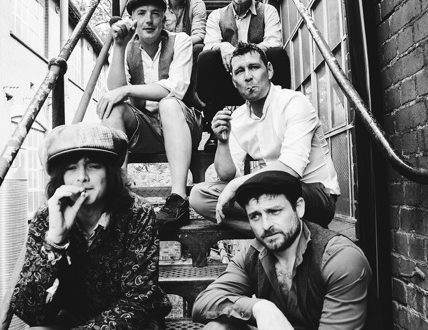 Hartlepool based 5-piece The Jar Family have today released their new single ‘Debt’ (via Jar Records).  It’s a song born from the high unemployment rate and growing financial concerns seen in their hometown.  In the bands words “it’s a song about life in modern Britain and the pressures of the soaring cost of things. It’s a big step forward for us stylistically to something more raw and reflective of the times.”

Taking their name from the donations jar they passed around at early gigs, the band are a tight knit group who realised that they were stronger collectively than they were individually.  Although on paper the idea of five very different and charismatic personalities with a wide range of musical styles working together harmoniously seems unlikely, the fruits of their labor speaks for itself.

The bands distinctive, rootsy sound was created in the remote Cambridgeshire countryside.  It’s there that the band built themselves a basic rehearsal studio, and there where they spent over a year living in a ramshackle collection of old caravans, developing and refining what was to become the Jar Family sound.

A relentless touring schedule, alongside supporting the likes of Jake Bugg, Babyshambles, and Alabama 3, has brought their raucous and engaging live show to all corners of the country. Picking up an ever-growing army of admirers as a result of this live activity the band has now established a major fan base of fanatical supporters throughout the UK.