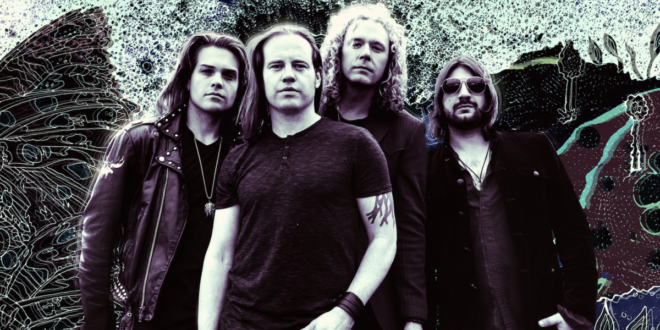 Southern rock group Wayland are coming out from their shell in Wayland, Michigan to show the world they’ve got something to prove. Their debut album Rinse and Repeat under Mighty Loud/InGrooves released September 22nd. Guitarist Phillip Vilenski took time out of his day to discuss the new record and inspirations behind the music.

ME: How are you?
Phil: I’m really great, thank you. It’s been an exciting day. Our record just came out today.

ME: Yay! Have you all celebrated for the release?
Phil: Well, we celebrate on a nightly basis after every show. We’ll make sure to celebrate twice as hard tonight.

ME: Is this your actual first full length album?
Phil: Yes and no. The band put out a full length album in 2010, but it was kind of out of the trunk of our car. This is our first label release. It’s the first album for the four of us. We got a new drummer in January, and he was a really big part of the sound of the new record.

ME: The title “Rinse and Repeat” is a bit heavy. Is there any significance behind that?
Phil: Ya think so? We chose it because it was light. (laughs) It is that deep, actually. It can be taken a lot of ways. A lot of the lyrical content is happy, because it’s all written from a personal place. We always love a play on words… We just kind of felt like it was a reinvention and reflection of our personal lives on and off the stage. It just made sense. It all comes out in a wash.

ME: Is there an overall theme for the album?
Phil: No. Other than the fact, like I said, all of the songs are written from a personal place. It’s about our lives over the last 4-5 years being a band.

ME: The first single “Through the Fire” is an upbeat song about being a safe haven for someone. Was that song written out of a self reflection type track or was it about someone specifically?
Phil: We had a friend close to the band who was struggling with depression at the time. Sometimes you don’t always feel like you want to give someone advice if they haven’t asked for it, but it was weighing on us heavily. We just felt like… it was really like a letter to them saying I’m here for you if you need me.

ME: Aw, that’s so sweet. I think “Revival” is my personal favorite off of the album…
Phil: That’s cool! I’ll never forget a very special moment. Mitch wrote the skeleton of that song, and sent it to me in an email. Nigel and I were driving up from Nashville together to meet Mitch in Chicago, Illinois. We put that demo in the car stereo of just Mitch playing his acoustic guitar. We were like, “Oh my God” and just so excited. It was one of the last songs recorded for the record.

ME: Do you have any personal favorites that you’re excited about to perform out on the road?
Phil: “Follow” is one of them that I’m really proud of. It’s a beautiful song. The other one would be “Rabbit River Blues/From The Otherwise.” The whole record…. we didn’t have any limitations on it. We didn’t try to stay in any kind of box. We just wanted to express ourselves. That song… I feel like we just let it get as weird as we wanted. (laughs) And the lyrics are real special. We were toward the end of the record, and Mitch had a really close friend and music mentor to him that passed away. I swear, he wrote that song in a matter of four minutes. They just flowed right out and came together. I remember I had written that riff… that acoustic guitar core progressive that morning before we went into the studio. It all just went together really well.

ME: That’s amazing. Being from Michigan, I’m shocked and amazed you all have such a southern rock sound. I’m sure y’all have heard that before.
Phil: Yeah, we have heard that. Ya know, our new drummer is from Atlanta, so that justifies all that. (laughs)

ME: Yes! Have the blues always come natural? Who are your influences?
Phil: Wayland, Michigan, where I’m from, is only like two and a half hours from Chicago. So the Chicago blues have always been an influence. When I first got into rock’n’roll, I was listening to Lynard Skynard, Allman Brothers, and Delta Blues.

ME: What kind of hobbies do you have away from music?
Phil: Not much. (laugh) This is my life inside and out. I feel lame when people ask me that question, but it’s a passion turned obsession. To get out of my mind and relax, I play guitar. For my job, I play guitar. When I want to hang out with my friends, we all grab guitars.

ME: Well, hey, nothing wrong with that! You have a few shows coming up in your home state. Are you all excited for that?
Phil: Yeah! We have a CD release party coming up next weekend.

ME: Do y’all have any pre-show rituals?
Phil: About an hour before the show, we turn music on. Aerosmith, Blackberry Smoke, any favorites of ours that give us the rock’n’roll vibe. We always take a shot of Jack Daniels before we go on stage. Sometimes two or three of them, depending on how frisky we’re feeling.

ME: Can we expect a tour for the new record?
Phil: Yeah, we just announced a tour the other day. We’re going to be out with Josh Todd & The Conflict, Hinder, and Adelitas Way. We have a rotating bill. I know Hinder and Adelitas Way won’t be there for the whole tour, but us and Josh Todd will be there for the whole tour. We start in El Paso, and it circles the entire country, ending in L.A. the first week of December.

ME: Sweet. Do you all have any plans to go overseas?
Phil: Yeah, our label and management is talking about planning some overseas stuff for next year.

ME: Phil, thank you for taking the time out of your day!

Stay connected with Wayland and grab a copy of Rinse and Repeat:

Kitchen Designer by day, Concert Photographer/Writer by night. 24. Arkansas.
@tsheaphoto
Previous Photos: A DAY TO REMEMBER at Self Help Fest in Orlando, FL 9/30/2017
Next Album Review: Five of the Eyes – The Venus Transit