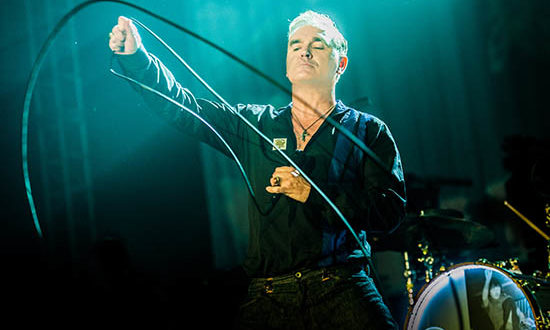 Morrissey has unveiled “Spent The Day In Bed,” the debut single from his new studio album Low in High School (out November 17 on Etienne/BMG). A departure from the sound of his canon, the song is driven by electric piano, synthesizers and acoustic guitars which underpin the iconic British singer’s intimate call to focus on our own strengths and to “stop watching the news because the news contrives to frighten you, to make you feel small and alone”. You can listen to the official audio below.

Morrissey has also confirmed the artwork from his forthcoming LP as well as the full track listing that seeks to capture the zeitgeist of an ever-changing world while combining his political statements, personal insights and beautiful melodies. Low in High School was recorded at La Fabrique Studios in France and Ennio Morricone’s Forum Studios in Rome. The record is produced by Joe Chiccarelli (Frank Zappa, The Strokes, Beck, The White Stripes).

The album will be available on multiple digital and physical formats, including MFiT, MQS, CD, LP, and cassette. Limited vinyl formats and bundles will be available via the Mporium. Options include different colored vinyl with lyrics and sleeve notes in French (blue), Spanish (transparent orange), and Japanese (transparent yellow). The Mporium will also stock a limited edition 7” box set with clear vinyl.

In addition to selling out one night at LA’s iconic Hollywood Bowl almost instantly with a second show announced, Morrissey will tour in support of Low in High School, where he will perform many of his beloved classics as well as songs from the new album. Cities Morrissey will visit on his tour include: New York, Washington, DC, Philadelphia, Chicago, Denver, Salt Lake City, Phoenix, Detroit, San Francisco, Seattle, Boston, St. Louis, Paso Robles, CA, and Portland, OR. Full tour details including dates and venues to come. Follow Morrissey HERE for tour updates.

Recognized as one of the most influential artists of all time, Morrissey is widely credited as a seminal figure in the emergence of indie rock and Britpop, and his music acts as a rite of passage for all who discover alternative music. His lyrics, at times blunt and fearless, other times vulnerable and poignant, continue to resonate with listeners around the world with their unmatched emotional depth and theatrical, poetic delivery. After The Smiths, Morrissey achieved greater success as a prolific solo artist. All 10 of his solo albums have entered the Top 10 on the UK album charts, including three entries at No. 1. In 2013, Morrissey published his record-breaking autobiography on Penguin Classics, immediately topping the best-seller list with literary reviewers hailing it a masterpiece in writing and prose. Pitchfork called him “one of the most singular figures in Western popular culture,” and the UK’s Independent declared, “Most pop stars have to be dead before they reach the iconic status he has reached in his lifetime.”

On October 20th, a special five LP box set deluxe version of The Smiths’ ‘The Queen is Dead’ will be released to celebrate what is perhaps the band’s most iconic album.

Previous Blessing A Curse Release New Music Video for “Every Single Lie”
Next The Head and the Heart Roll On, Playing NYC This Thursday (Sept. 21st)