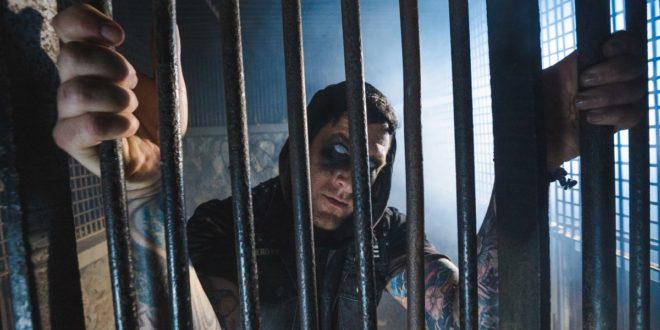 Los Angeles, CA – Sept. 16th, 2017 – Rising Rockers Ded are one of the year’s breakout acts and they’re ready to further advance that notion with the premiere of their latest video for “Remember the Enemy”.

The Phoenix, AZ based group reunited with video director Fred Durst for this latest clip, which finds them performing against a lit up forested backdrop, while clear-eyed vocalist Joe Cotela also makes the most of a cage setting to set the tone for the clip. As for the song, it’s plenty of low end heaviness offset by electronic high-end keys, making for an engaging and hard driving rock track that’s guaranteed to stick in your head for days.

Speaking about the song, Cotela explains: “‘Remember the Enemy’ is a song about self-reflection. A couple years ago I started defeating myself with anxiety and depression. I was taking a lot of Xanax and medicating heavily with booze. It was at some point in there that I realized that I am in control of all of this. My brain and my thoughts only exist in ways that I allow them to. A great quote I came across summed it up: ‘The difference between who you are and who you want to be is what you do.’”

He continues, “I started going to cognitive therapy. I had to stop what I was doing, honestly look at myself and pick my ass up! I got mad at the anxiety/depression, I made it my ‘enemy.’ I had to beat the s–t out of it and stomp it out. I was in my own way, my own worst enemy. It hasn’t completely gone away, it still rears its ugly f–king face at times – but now I know what the f–ker looks like and how to deal with it.”

As for the Durst-directed clip, the singer states, “We shot the video for ‘Remember the Enemy’ in Griffith Park at the old abandoned Los Angeles Zoo, that was opened in 1912 and closed in 1965. That area has turned into a hidden park/hiking destination. It is an eerie setting and is supposed to be haunted by the animals that were once imprisoned there in such obsolete, harsh conditions. We really went for a dark, nightmarish horror movie vibe, and we think we achieved that. As a side note – the scene from the Will Ferrell Anchorman movie where they fall into the bear pit was also shot there. We hope fans enjoy RTE!”

“Remember The Enemy” is the follow up to “Anti-Everything” which reached the Top 20 @ Rock radio and who’s Durst directed video has surpassed 1 million views on Youtube. RTE is off to a great start @ Active Rock Radio, and has quickly climbed to #27 and is rising. The song is also featured on popular Rock playlists at major streaming services: Spotify, Apple Music, Pandora, Amazon Music, Google Play Music and Slacker Radio, among others. If you like what you hear, it should be noted that Ded’s “Remember the Enemy” single is currently on sale for .69 at iTunes,  Amazon, and Google Play. Fans may also want to take advantage of the fact that the Mis-An-Thrope album will also be released on vinyl this Friday (Sept. 15). You can pick that up through Amazon.

Ded have a busy fall ahead of them with a mix of their own shows and several festival appearances. The band has been nominated for “Best New Artist” and will be presenting at the upcoming Loudwire Awards on Oct. 24th in Los Angeles. See the dates below and stay up to date with all things Ded via their website, Facebook, Twitter, and Instagram accounts.

After she first fell in love with the concert scene in early 2013, Kate picked up a strong passion for concert photography, having taken classes in high school. She can be seen swiftly maneuvering in the photo pit, capturing those live shots that bring joy to all of us. When she's not in the photo pit, she's either sitting on her porch, watching the beautiful Virginia sunset or watching her puppies play in the grass. Or she can be found in her Bat Cave, editing and writing away, sipping on a large cup of coffee.
@kdrexphotos
Previous Nova Rock 2018 presale starts tomorrow!
Next Gallery & Review: Zac Brown Band at Walmart Amp in Rogers, AR 9.14.17