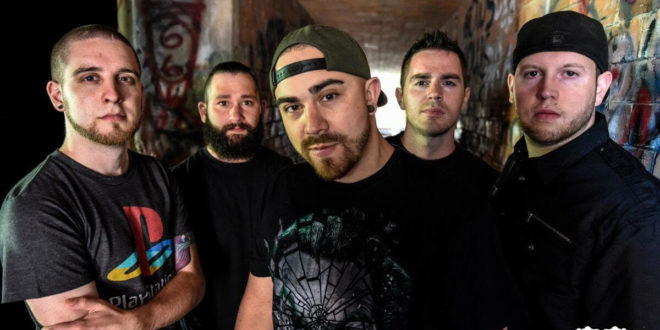 There are so many ways to discover new bands, or bands new to you in general. From the various online music apps (Spotify, Apple Music, Google Play, etc.), radio, to recommendations from friends. But my favorite way of finding a new band is through live music. That’s how I discovered Silent Season. It was mid-summer 2014 in the blazing heat of Lynchburg, VA when I first saw Silent Season open up for Gemini Syndrome and Sevendust. I was awed by their incredible live performance. After seeing them at least three times in 2014, I became a fairly big fan.

Silent Season is a melodic-rock band hailing from Boston, MA featuring vocalist Jeremy Rae, guitarists Brendan Sheehan and Anthony Puliafico, Jr., bassist Jay Driscoll, and drummer David Pappalardo. This five-pieced package has released some incredible music over the years including their debut 12-track record Breaking Me Down, released in 2012, and their 2014 single “Us All.” Not too long ago, the band announced their latest single “The Negative,” as part of their upcoming EP, details to be determined soon.

Listing various bands from 10 Years, Breaking Benjamin, Three Days Grace, Red and more as their influence, Silent Season puts out a sound that certainly captures the ears. From Rae’s powerful vocals, to the sick riffs of Sheehan and Puliafico, Jr., the thumping bass of Driscoll and the rhythmic drum-crashing of Pappalardo, this band’s music certainly has a unique and amazing sound. Over the years, Silent Season’s sound has matured, if you will, growing increasingly heavy, with “The Negative” being dubbed as their heaviest yet.

Recently, I had the opportunity to catch up with Silent Season’s front man who shared the band’s beginnings, their upcoming EP and more.

Music Existence: Why was there a time gap between “Us All” and “The Negative”?

Jeremy Rae:  Well, we were going through some manager changes at the time and a bunch of things basically people were telling us that we needed to update our music because we had come out with the last album in 2012 and “Us All” was relatively new but they just wanted more. And we kind of just took our time a little bit just so that we could try to make the best music as possible. It didn’t really mean to make it as long as it was but you know things happen in life too, there were a few life things that were going on and we were just trying to get it all together. I’ve basically been in my practice space the last…I don’t know, however many years now it’s been…trying to write and trying to get the best possible material going.

ME: What can you tell me about the new album? What can we expect from it?

JR: It’s going to be an EP. It’s going to be five or six songs on there, including “The Negative,” and it’s a diverse EP that’s coming out. You know, “The Negative,” it’s kind of a heavier song and it’s our heaviest to date, I believe, which is kind of exciting and we have a good balance of everything else too. We have some heavy stuff in there, we have a more commercial song in there, then we have some in between stuff, so it kind of leans towards all different markets instead of trying to appeal to one market.

ME: Will you have a surprise guest vocalist on the next album, like in “Find Your Way” from Breaking Me Down?

JR: No, it’s solely just us this time around. I don’t know if that will change…we are planning on doing an album in the future. We’re in the middle of writing some stuff right now as well as finishing up the studio stuff for the rest of the EP but as of right now, I don’t have anybody else on there. It could be something that could happen in the future. I just haven’t come across any situation where I need another person in the song yet.

ME: Who was the guest vocalist in “Find Your Way”?

JR: That was Shelby [Carcio] from Era for a Moment. She’s a good friend, I actually just saw her the other day…we were just catching up…but yeah, I haven’t spoken to her in quite a while, really.

ME: You listed Breaking Benjamin, Sevendust, 10 Years, Red, and a few other bands as your influence. How would you say their music is significant in your sound?

JR: Well, I listen to all kinds of stuff all the time, I try to keep up with the latest music and what’s going on in the trends and stuff like that. Sevendust has always been one of my favorite bands, you know just growing up on them, getting to tour with them and all that stuff. But I say that they inspire us in the sense that I dig their heavy riffs, how melodic all those bands are and I think that what I seek from that is that you need to have a good balance of both of those things in order to make a catchy song. I’m always searching for new bands. I really like Ded as of late, too; they have a great new album. Righteous Vendetta, we played a couple of shows with them. Just watching them on stage and their energy, it’s just very motivating to watch other bands and kind of see what they’re doing and take a little bit of notes here and there. We do our own thing, too; you know – just try to incorporate everything that’s new and exciting and try to stick with the roots of where we come from too.

ME: When composing a song, where do you get your ideas from and how do they evolve?

JR: They usually evolve from…sometimes someone will come up with an idea, or a riff or something like that on the guitar and I do a lot of work on my computer, I do a lot of audio engineering stuff. So, we try to get material down on that, come up with ideas and then we all kind of sit down sometimes and go over what those ideas are and try to evolve it from there. And then we practice it afterwards, see how it works out and that’s just kind of the process we’ve gone about during this album. It’s just easier with all of the technology that’s out there if, you know, you come up with a song idea, show it to other people and see what they think and then just kind of all hash it out together.

ME: When you were recording Breaking Me Down, how was it recording with Jonathan Wyner?

JR: Jonathan was actually the person who mastered it. Alexander Hatziyannis is the person who recorded and mixed it. We’re still working with him at the moment and he’s actually doing the whole thing this time around. He’s mixing and mastering it as well as recording it and taking parts that I recorded from the practice space as well. Jonathan Wyner is great at what he does and a fantastic “masterer” …but we’re not doing anything with him at the moment, so we’re just working with our guy right now and he’s doing a really good job at all of the above. It’s been a great process because you get to do it all at once instead of bringing it to a couple of different people and trying to explain what you want from them. It’s just easier this way, I think.

ME: Why did you choose the name Silent Season to be your band name?

JR: It’s kind of funny, we were all thinking about names, I think this was in 2008 or so. My drummer Dave and I and our guitarist Brendan were the original members, who are still in the band now. We’re in the same space and [chuckles], we were trying to think about a title or a name that kind of reflected what was going on in the music industry and at that time, you know, a lot of bands that we had kind of played with and they inspired us in the local scene…all those bands were slowly fading away and they were getting older and realizing that they were trying to do things and it was just not really possible. We were trying to overcome that at that point. So, “silent season” kind of represents it, like a season where [chuckles] bands were kind of just dropping off and we were kind of starting. It was the start of something fresh; I guess is what it really meant.

ME: What was the biggest challenge you ever faced? How did you overcome it?

JR: Oh man…well, everything is a huge challenge in this industry. You can’t really avoid that. It’s probably one of the toughest industries to get into…but I’d say that one of the toughest things is trying to market yourself and get yourself out there without a budget or a smaller budget versus bands who have money and/or bands who are on labels, trying to get out there, it’s a little bit easier for them because, you know, they have those avenues, whereas we’ve been trying very hard to raise money and trying to do it all on our own, be self-sufficient. Every dollar that we make from iTunes or Amazon or just royalties in general, we put back into the band, we don’t take out that money. It’s just kind of like a recycling thing, you know recycling the money back into the band. So, I’d say that’s the biggest challenge at this point, it’s just trying to get out there the right way and to do it without having this budget, and the people to help us out…though we do have people who are helping us out, not to say they are not but in the sense of money and stuff like that, it’s a big challenge to try to get out there.

“The Negative” is out now for digital download. Be sure to visit Silent Season’s website here and social media pages for show announcements and new music releases.

After she first fell in love with the concert scene in early 2013, Kate picked up a strong passion for concert photography, having taken classes in high school. She can be seen swiftly maneuvering in the photo pit, capturing those live shots that bring joy to all of us. When she's not in the photo pit, she's either sitting on her porch, watching the beautiful Virginia sunset or watching her puppies play in the grass. Or she can be found in her Bat Cave, editing and writing away, sipping on a large cup of coffee.
@kdrexphotos
Previous Album Review: Arch Enemy – Will to Power
Next Interview: Tetrarch