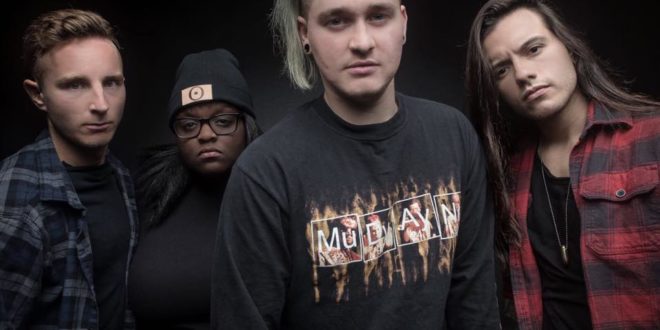 Atlanta based quartet Tetrarch have joined forces with DevilDriver, 36 Crazyfists, Cane Hill, and Uncured to deliver a night of solid metal across the U.S. Guitarist Diamond Rowe and guitarist/vocalist Josh Fore took the time to sit down outside George Majestic Lounge in Fayetteville, AR to discuss the upcoming album Freak, their most memorable moments of their career, and more.

ME: You’re a little over halfway through the tour with DevilDriver. How has it been so far?

Josh: It’s been a lot of  fun. Every day we’re just getting to know the guys a little bit more. The shows have been great; the crowds have been awesome. It’s been a ton of fun.

Diamond: Yeah, it’s cool to play in front of people we wouldn’t normally. This is definitely a little bit more of a masculine crowd then we’re used to. But it’s fun! We’ve had good reception.

ME: That’s great! Is this the first tour across the entire U.S?

Diamond: No, we’ve done a few of those. This is our first national U.S. tour where we’re having with bigger bands and like a complete package. Some of these bands are bands that I listen to, so that’s pretty cool too.

ME: Have there been any memorable moments so far?

Josh: One of my favorite shows so far has been in Portland. (As Diamond says in the background “Portland, for sure.”) The packed crowds have been nuts. It was the second…day…?

Diamond: Yeah, it was the second day of tour. The entire crowd was pitting the whole show.

ME: That’s amazing. So,  give us a little bit of a background. How did you all meet?

Josh: I met Diamond in seventh grade. We went to middle school together. After a couple of years, she started playing guitar. From that point, we were just like, “Hey, we should jam together.” We started jamming, and around 2007/2008 we started playing in a band; we played some covers, things like that, and then we started writing our own stuff. Then it was around, what, 2011 or 2012?

Diamond: About 2011/12 we started kinda dabbing a little into touring a bit and writing our own stuff. We started writing our own stuff a little before that, but not really recording them. That’s around the time we got pretty serious and like, “Alright, this is what we want to do.” Before that, it was kinda like learning how to be a band. But yeah, we met in high school, and he was in a band jamming with some guys who were our best friends at the time. They would just jam covers and stuff, so I was like, “Ya know what, I want to be in the band.” And he was like, “No, I don’t want a girl in the band.” (laughs)

Josh: But! Now, I did say that but then she came over. We jammed “Old Time Rock And Roll,” then I was like, “Alright, this is awesome.” (all laughing)

Diamond: Yeah, and ever since then, we’ve lead the ship on. We’ve gotten some new members and stuff, and yeah.

ME: Now I know you started guitar at thirteen (looking at Diamond.) Have you been loyal to the guitar, or have you branched out and experimented with other instruments?

Diamond: Guitar is my main instrument. I don’t really branch too much. In school I played drums in jazz band, the flute, and marching band drums. I can play a little bass, but guitar is my thing, for sure.

ME: What about you? (looking at Josh) What’s your musical background?

Josh: My family was very musical; my grandma would show me how to play clarinet when I was young. I started playing guitar when I was nine, I wanna say. My dad would always be showing me videos of Metallica and Pearl Jam. I would just watch the different bands and be like, “Man, I really want to play guitar.” They got me one when I was nine, and I just haven’t put it down. Same as her (looking over to Diamond,) we played in a jazz band and marching band, but I’ve just always loved the guitar.

ME: So you all have mentioned Metallica and Pearl Jam. What are some of you all’s musical influences?

Diamond: Definitely starts with Metallica. That is overall this band’s favorite band. My favorite bands are more of my influences, Korn, Metallica, Slipknot, Lamb of God stuff like that. He might be a little different, but for me, that’s pretty spot on.

Josh: Yeah, from all those, definitely Korn, Slipknot, Avenged Sevenfold. Bands like Trivium. I have a really broad music range that I like, but it’s definitely the heavier bands that got me into music, for sure.

ME: If you all had to each choose just one band you could share the stage with, who would it be?

Diamond: I’ve always put them to the side, because I’m like, obviously, it’s Metallica. But if I had to do another band, I’d have to go with Korn or Slipknot.

Josh: Yeah, I’d have to agree with that, for sure. (laughs)

ME: It’s been about a decade since you all have been in the industry. What has been the most memorable moment overall?

Diamond: Probably playing with Avenged Sevenfold. For one of our first big shows, we got asked… there was a radio station in Atlanta called Project 9-6-1 for a long time. It was a big rock radio station. They would have these contests where locals could compete to open for Bullet For My Valentine, that sorta thing.

ME: Kinda like a Battle of the Bands type thing?

Diamond: Yeah, exactly. It was more-so with online voting. I remember they would never put us in the competition; they didn’t know who we were. We had ALL of our friends, everyone we could think of, email the radio station and ask to put us in the contest. I swear, they probably got like a thousand emails in two days. The DJ’s name was Aly, and she emailed us and was like, “You guys can’t just have people email us to get what you want.” She was mad, because we were blowing it up. But, eventually they put us in this competition to play with Bullet For My Valentine. It was with this older band. They were ruthless; they kept taunting us the whole time and calling us kids. They won.

Josh: We were bummed, super bummed.

Diamond: We were trying so hard, and they were just shitty to us about it. The radio station grouped ended up liking us, so a couple of months later, they just emailed us and said, “You guys want to play for Avenged Sevenfold?”We didn’t have to compete or anything. It was Avenged Sevenfold, Seether, and Alter Bridge. We opened up a fourteen-thousand seater amphitheater. We’ve done a lot of cool things since then, but that was probably the first big experience we got.

Josh: I remember looking over to my right, and Diamond’s way down there. Probably about forty-five feet away from me. It was awesome.

ME: That’s amazing. When it comes to creating music, is it a collective effort, or do you all do your own parts separately then mesh them together?

Josh: It’s between me and Diamond for a lot of the song writing. One of us will have a couple of riffs or a full song together, and then we’ll just tweak them. It’s definitely a blend. Our new album, Freak, is kind of like a 50/50 blend of us. Ryan and Ruben will sprinkle drum and bass parts to really fill out that sound to make it Tetrarch.

ME: What is your favorite song to perform live?

Josh: Right now, I’m really excited about finally playing “Freak.” That’s our first track off of the record, and we didn’t play it on our last tour. We brought it out for this one. It’s going to be a lot of fun to play for you guys.

Diamond: Mine would either be “Pull The Trigger” guitar wise or “Freak.” I have to agree “Freak” is pretty fun to play.

ME: What can we find you doing in your free time?

Josh: She likes to fish.

Diamond: I’m weird. I’ve just gotten into this weird thing where I like bass fishing. I don’t know what’s going on. I’ll watch YouTube videos about it, so I’ll have my poles nearby waiting until we’re near water. Don’t ever catch anything, but, yeah. There’s not that many lakes and stuff to do it, but if there was, you’d know where to find me.

Josh: I like playing basketball. In my free time, I also like to be super lazy. Just lay around and do nothing a lot of times. (laughs) I’m very good at that. But I do enjoy getting to play sports.

ME: My last question is do you all have any plans after the tour?

Diamond: This tour ends on the 22nd for our last day in Texas. We head back to L.A. for the first day of the next leg of the tour with Superjoint, DevilDriver, Cane Hill, and some other bands at the Whiskey. Our record comes out the 29th. We’re going to shoot some videos for some singles and release those. We’re playing some festivals in November. We’re going to try to start booking tours into the next year for the record. That’s our main goal right now, to fill our calendar for next year.

ME: I thank you all for taking the time out of your day to talk to me. I appreciate it.

Both: Thank you so much!