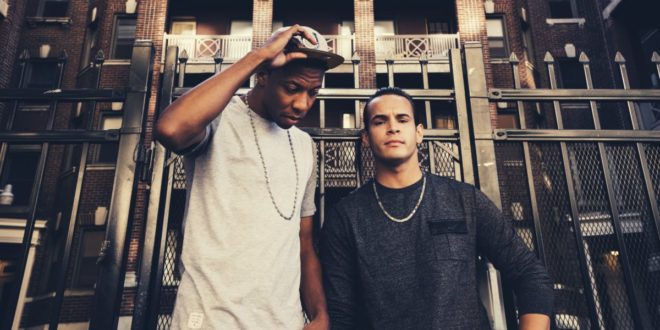 New Jersey-based urban pop duo Epoch Failure recently released their sophomore EP Warrior’s Hymn, which includes an inspiring cover of the Bon Jovi’s hit single “Livin’ On A Prayer“, and follows in the inspirational footsteps of their immensely well-received track “Champion“.  Music Existence had a chance to catch up with the pair to discuss their latest tracks, their love of WWE and their drink of choice on stage.

1. Thanks for chatting with us, guys! So how did you two meet?

NICK- We met through Billy’s cousin, who was in my Army unit.  He said I should make music with his cousin, and I brushed him off because at the time I wasn’t interested in working with other artists… especially singers! I’m a photographer in the Army, and after I declined the request to collab musically, Billy’s cousin asked me to take some photos of Billy for his mixtape.  I did, and we became friends after that. I listened to Billy’s music and it was just so-sofor me at the time, but his charm and charisma were undeniable. In order to complete his musical recipe, I knew he was missing one key ingredient… me. When I approached him about collaborating, Billy wasn’t interested in working with a rapper so he returned my earlier brush off. We just stayed friends for a while. I continued to ask him about collabing, and I eventually left an open invitation to make music with me. Finally, one January night, Billy showed up at my door soaking wet and freezing cold. I found out he didn’t have any place to stay, and I offered him my second bedroom (which doubled as my home studio) in exchange for making tracks and recording songs with me. So we lived together for a little over a year, and during that period we made a ton of great music. That was the beginning of Epoch Failure.

2. Did it take awhile to find your sound or did you go into the collaboration with a clear cut idea?

BILLY- The chemistry was instant when Nick and I sat in the studio together for the first time. So I would say we’ve always had our groove, but our sound is forever evolving.  Similarly, how we work and the way we create is continually changing as well. You know, what works on one track might not work for another.  Plus, we continue to keep learning each others limits… and keep pushing them.

3. What made you choose “Livin on a Prayer” to cover?

BILLY- We wanted to do a cover of classic song and we thought it could be dope to do a classic rock song because that’s not something you see often in urban music or rap.  Being from Jersey, Bon Jovi has been a huge inspiration and one of our favorites, so it was pretty much a no-brainer to pick Prayer. We had a lot of starts and stops and “back to the drawing boards” during the process.  All said and done, it was nearly a year of fine tuning and tweaking to turn it into something special. For me the song officially took flight when Nicky came up with his amazing verses, putting the first person spin on the Tommy and Gina story.

4. How did Jon Bon Jovi catch wind of the track?

NICK- Jon Bon Jovi’s brother (Matt Bongiovi) found our lyric video for Prayer in his Facebook newsfeed, and he reached out to us. He asked if he could share the video with his brother, and we happily obliged. Minutes later, Bon Jovi posted our video on their website and on all of their social media pages. It was surreal. Initially we were concerned about legalities and clearance issues for releasing it. And then we ended up getting the ultimate stamp of approval. It was incredible how it all unfolded, and we were honored.

5. Your track “Champion” got quite a bit of placements. Which one meant the most to you personally?

BILLY- It changes and I go back and forth.  But, right now, probably the WWE Slammy Awards. I grew up watching their dope ass montages with bands like Limp Bizkit, Metallica, Korn and Creed as the soundtrack. As a kid, I remember thinking, “Some day I want them to use my music for one of those.”  So when this dream came to life on “Monday Night Raw,” it was beyond amazing!

6. Billy, you’ve said that you’re a big fan of WWF/WWE. Who is your all time favorite wrestler? Do you still keep up with it?

BILLY- I grew up during the attitude era so, yeah, I’m pretty invested. And nowadays, yes, I’m still very much a fan!  NXT is pretty dope, and so is this cruiser weight division. But, frankly, my new obsession is the women’s division. Talk about some ladies who can hold their own in the “squared circle.”  If we’re talking favorite of all time, then it’s a tie between The Rock and Stone Cold Steve Austin.  I feel they both inspired and shaped who Billy The Kid is today–– I strive to have the flash of the Rock, along with the grit and badassness of Stone Cold!

7. I see you guys have been in the studio lately, what are you working on?

BILLY- We’re working on really raising the bar and taking the Epoch sound to the next level.  We strive to get bigger and better every time we drop a new project or a new single. This time we’re working with an amazing Capitol Records producer, Tommee Profitt, and I think we’re going above and beyond anything we’ve done to date.

8. Do you have any live gigs coming up?

NICK- We’re focused on writing new material now, so we haven’t lined up any major gigs or regional runs. I’m sure we’ll do some local shows in Philly and NJ to keep our live chops up and stay on our toes.  We’ve played the NYC Marathon the last four years in a row, so we may break from our writing/recording mode to squeeze that bigger one-off gig in. It’s been a blast every year, and the promoters have always treated us really well.

9. Do you guys like to booze up on stage or do you save that for after? What’s your beverage of choice?

BILLY- We drink a little before, a little during, and generally lots after.  Nick tends to lean more on the classy side, but I’m a simple Pabst Blue Ribbon boy myself.  It makes for a good balance. Lol

NICK- Yeah, we don’t ever go on stage completely sauced, but we definitely take the edge off. Afterwards it’s more crazy. Once we’re done being performers, we become fans again and we’re out in the crowd dancing to the next band, and enjoying our spirits… responsibly, of course. I have a bit more refined taste than Billy (he likes swill beer). I like a well-aged Scotch. Johnnie Walker is a standard go-to, but a nice bourbon like Maker’s Mark or Knob Creek will always do me right.

10. Speaking of live gigs, if you could put together a one day festival with your favorite bands (dead or alive), who would make the cut? What would you call it?

11. Anything else you’d like to include before we wrap?

BILLY- For Nick and me, there is nothing more important than making music.  Epoch Failure is the result of hours and hours of hard work from us and from the team we roll with.  We ain’t playing around.  We truly love what we do, and we’re so grateful for all the fans following us and supporting us! 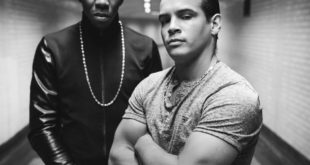 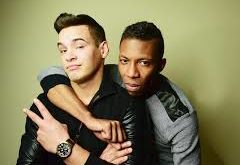