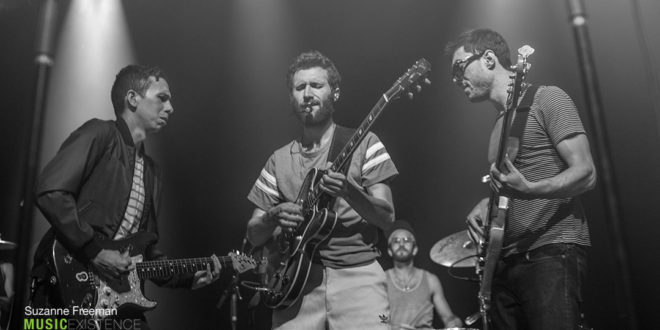 Gallery and Show Review: Vulfpeck at Brooklyn Steel in Brooklyn, NY on September 9, 2017

Vulfpeck just finished a three-night sold out run at Brooklyn Steel in Brooklyn, NY before embarking on their sold out European tour. The level of musical proficiency and sheer enthusiasm they bring to the stage always does an amazing job of engaging the audience. Most of the members are multi-instrumentalists and frequently switch up instruments during the performance, which is a central element to the show itself.

The band started in 2011 with four core members Jack Stratton, Theo Katzman, Woody Goss and Joe Dart, although they usually have a host of guest musicians that play with them during performances. (See Brooklyn Steel guest list below.) The four are friends from college and that friendship, respect and camaraderie visibly sets apart Vulfpeck from other shows I’ve seen.

There’s a variety of fun things that happen at a typical Vulfpeck performance. One of the highlights during the second Brooklyn Steel date was when Jack Stratton’s mom joined them on stage to teach the audience the “Funky Duck” dance. She had the entire sold out crowd (and some of the band members) dancing to instructions like “Flap your wings” and “Make a duck bill with your hands.” Theo Katzman led a crowd sing-a-long in 3-part harmony to the song “Christmas in LA.” He jumped into the pit at one point and had members of the audience sing the chorus, even calling some of them by name.

You can tell Vulfpeck has fun together when they play. They frequently exchange hugs, high fives and fist pumps, and that energy makes it only more fun for the audience. Be sure to catch them on tour to experience it for yourself.

They are embarking on the first leg or their European tour in Paris, France. You can find the full schedule here.

Fun Loving Music Photographer and lover of live music in general. I am most likely to be spotted with a coffee in one hand and a camera in the other, somewhere in Philadelphia, New York City and everywhere in between. For more of my music photos: http://myphotos.bellemorephotography.com/
@bellemorephoto
Previous New Music from HEYITSLUKA – “Papi Chulo”
Next CLASSIC BOSS 1st & 10 Grind Vol. 1