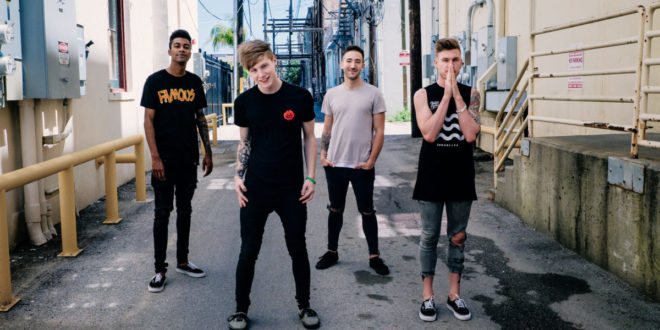 Rhode Island’s Makeout have released a new video for song ‘Secrets.’ The song, which originally premiered on Alt Press, is taken from their debut full-length album “The Good Life” which is released on 29th September via Rise Records.

Talking on new song the band said “Being cheated on is one of the most brutal things people can go through. It’s miraculous how something that you invest so much in, whether it’s with time, or money, or whatever, can be thrown away for something as meaningless as sex. People can be sluts sometimes… the hardest part is accepting that those people don’t deserve you. If you know what I’m talking about, you should give this song a listen.”

The record sounds like a party,” says Boxold. “There are so many different influences touching it… That’s the kind of party we like!”

For The Good Life, Makeout worked with multi-platinum producer and songwriter John Feldmann (Blink-182, 5 Seconds of Summer, Beartooth). They also wrote and recorded with 5 Seconds of Summer’s Ashton Irwin and Calum Hood, as well as legendary skinsman Travis Barker. The album is packed to the gills with upbeat and unforgettable anthems with stadium-sized hooks that will take up residence in your brain for days at a time.

The Good Life is available for pre-order here.

Previous US alt-folk stars Judah & The Lion head to the UK
Next Ozone Squeeze Kick Off Tour, New Album Due September 15th