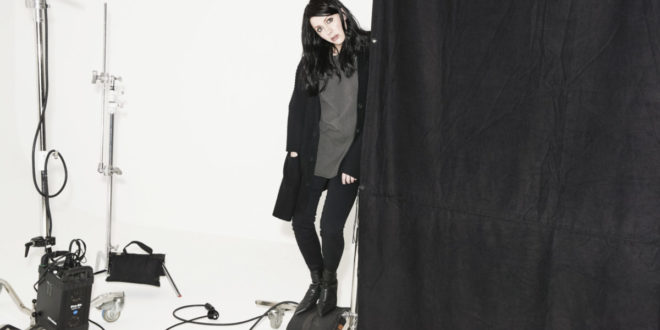 In addition to the music, K.Flay has been an active voice in the community. She recently spoke out in support of the transgender community, alongside The Chainsmokers, Rita Ora, Michael Stipe and more, partnering with Billboard and GLAAD for a heartfelt message against the administration’s ban on transgender soldiers openly serving within the United States’ armed forces. Watch the touching video HERE.

K.Flay also joined forces with Spotify, participating in I’m with the banned, a series of collaborations between U.S. artists and musicians from countries affected by Trump’s travel ban. Learn more about out her collaboration with Iranian artist Kasra V HERE.

To celebrate the 1 year anniversary of last year’s Crush Me EP, on August 19th K.Flay took to Medium to announce the release of her Crush Me Book; a compilation of fan messages and notes from her days on the road this past year. Proceeds from the book, which is available for purchase on her website, will go to local charities submitted by fans and hand-selected by Kristine.

Since making her debut in 2010, K.Flay has spun fearlessly detailed lyrics that show the bright and dark of the world in her head. For her second full-length Every Where Is Some Where (released April 4, 2017), the L.A.-based singer-songwriter delved deeper into introspection while adding an element of political commentary. The result is her most deliberate and dynamic work yet, a thrillingly vital album that channels the frenzy and anxieties of today’s world but ultimately exhilarates. According to K.Flay, “each song on the record is about creating a different kind of meaning out of a different kind of something,” she explains. “Even the dark places are places. You’re still somewhere.” Serving as the follow up to her 2016 EP Crush Me—whose lead single “Blood in the Cut” hit the top 5 on Modern Rock radio—Every WhereIs Some Where amps up its defiant spirit with a densely textured yet gritty sound. Watch the Lorraine Nicolson-directed video for current single “High Enough” HERE.

K.Flay is the first signing to Interscope imprint Night Street Records, founded by her friend and collaborator, Imagine Dragons‘ front man Dan Reynolds. Every Where Is Some Where features production from some of pop music’s heaviest hitters, including Mike Elizondo (Fiona Apple, Regina Spektor, Skylar Grey, Twenty One Pilots) and Tommy English (BØRNS, Andrew McMahon in the Wilderness, Ladyhawke), amping up the album’s defiant spirit with a densely textured yet gritty sound. “After Life as a Dog I was listening to so much late-’90s/early-’00s rock,” says K.Flay, referring to her 2014 full-length debut. “I was absorbing the energy of people like Karen O, Shirley Manson, and Emily Haines and feeling totally inspired by it, so there’s lots more live guitar, bass, and drums on this record.” The new record also deftly infuses that same raw intensity she’s revealed in touring with such artists as PassionPit, Icona Pop, Awolnation, and Theophilus London.

See below for a complete list of tour dates

K.Flay’s “Every Where Is Some Where” is available everywhere now.
Retail | iTunes | Apple Music | Amazon MP3 | Spotify | SoundCloud