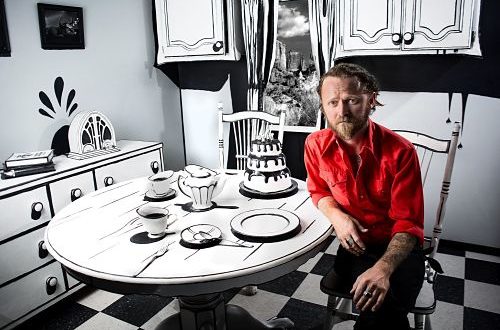 decker. has released a video for “Matchstick Man”—an openly defiant protest anthem written in resistance of Donald Trump‘s presidency. The song opens his latest LP,  Into the Red, out now on Royal Potato Family. While both the song and video were written and filmed prior to the events in Charlottesville, Virginia and the more recent announcement by the Trump administration to phase out the “Dreamers” act, its message with stinging lyrics like, “tell you something that you may not all want to hear, the revolution you’ve waited on is already here,” has only grown more potent in light of these recent developments.

“I am deeply opposed to the sentiments of intolerance, racism, sexism and xenophobia that Donald Trump and so many of his supporters are propagating. I think all compassionate, mindful humans feel as such. Yet, here we are,” says decker. “‘Matchstick Man’ as a song leaves some room for interpretation to the listener, but the video was intended to be a vivid picture of resistance to Trump and his ideologies and a celebration of diversity.”

decker. ‘Into the Red’ is available on vinyl, CD and digital formats. A U.S. tour to support the collection begins next week.

decker. is the pseudonym under which Sedona, Arizona-based singer/songwriter Brandon Decker has been releasing records since 2009. His latest collection, ‘Into The Red,’ is a career spanning retrospective, comprised of songs from his six studio records. It also features two newly recorded tracks: the searing “Matchstick Man,” written in protest of Donald Trump‘s presidency, and “I Wanna Be Your Dog,” a psychedelicized reinvention of The Stooges’ classic complete with a mash-up of The Doors’ “Five To One.” In its totality, ‘Into The Red’ offers a bird’s eye view of decker.’s remarkable journey as a fearless songwriter and relentless performer. It reveals him to be a craftsman of the highest caliber, one who’s carved a bittersweet catalog of heartrending gems. His music grabs you by the collar and takes you on a journey.

For decker., inspiration most often comes from the natural beauty that surrounds him in his adopted hometown of Sedona, Arizona. Thus the LP’s title, ‘Into The Red,’ serves as a not-so-subtle tip of the cap to his fascination with the area’s distinctive geology. More subtly speaking, it addresses his financial difficulties in attempting to sustain a career as an artist in modern day America, which can be utterly unforgiving to those pursuing creative endeavors.

“Sedona is this red rock land that looks like Mars. I grew up in the Midwest and I’ve been all over the place, but Sedona is the first place that really felt like home. I don’t think I’ve ever really written a song outside of Sedona. It’s this fertile little embryo for creation,” says decker. “But there’s also the fact that I’ve invested everything I have into the music. Energetically, emotionally, financially, everything has gone back into my art and growing as an artist.”