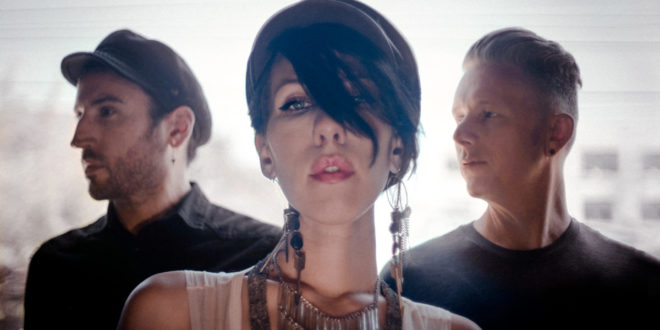 5
SHARES
FacebookTwitter
LA based electro art-pop band Pair of Arrows will release their debut EP, “Walls,” on September 29th via Blank City Records. Today, the trio has premiered the record’s first new song, and title track, “Walls.” The single will be available on limited edition X-Ray record and the full EP will be released digitally. Pre-Order the X-ray at http://blankcityrecords.storenvy.com/ and the digital EP at iTunes.
““Walls” is two stories of love and disenchantment interwoven: an epic and courageous love that burns bright but grows dark, imploding upon itself, and also the story of realizing that you’ve let a stranger live inside your home. One day they see that realization in your eyes and there is no going back.” – Swan Palermo
Pair Of Arrows is comprised of Swan Palermo (vocals), RD White (keys & production) and Brandon Burkart (drums). The three-piece’s electronic music evokes Depeche Mode’s new wave hooks and the post-punk sounds of Cocteau Twins whilst creating a dark dreamscape of modern day, left-field pop. Emotive vocals, warm synths, kinetic rhythms and massive bass drive and define the Pair Of Arrows’ sound.
The group’s upcoming release, Walls, will be their debut EP, but hardly their introduction to the indie-electro scene. Over the last 5 years the band has released critically heralded singles and performed shows to packed audiences, steadily becoming one of LA’s most promising breakout acts. Swan’s unmistakable work on The Glitch Mob’s critically-acclaimed debut album, Drink The Sea, led to her collaboration with producer and musician, RD; the pair’s creativity was instant and together they started writing and recording some of the most persuasive music of their careers as Pair Of Arrows. With the addition of multi-instrumentalist, Burkart (The Saint James Society, Cathedral Club, Dead Dawn), the band were able to add architectural rhythmic structures in an expressive live format, to its bass-laden mantle of synth production and transportive top lines.
Each song on this EP winds through its own territory, but if I were to pluck a common thread, it would be: the balancing act of power. A tightrope walk, if you will. How power transitions and morphs through connection, death, and our relationship with the world around us. Therein lies a warning, a fearless love and it’s disillusionment. Therein lies suicide and crossing over, a tragic and beautiful near-miss, and a reminder.” – Swan Palermo
Pair of Arrows’ new EP will be released by LA’s most intriguing new label Blank City Records. The record company specializes in releasing music on vintage medical X-Rays known as “RIBS” that were made famous in the ‘50s & ‘60s to smuggle Western music into the U.S.S.R. The new single, “Walls,” will be released on a very limited number of X-Rays and flexi records, and the full EP will be available digitally, all on September 29th. 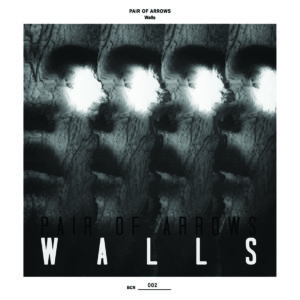