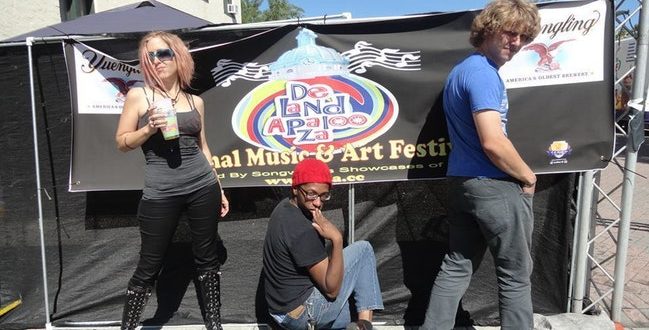 Described as a “female-fronted band with roaring electric guitar, thunderous bass lines and explosive drum fills”, self titled “punch rock band” Cardinal Slinky from Jacksonville, Florida, crashed into their music scene just in time, are currently working on a debut record, the name of which has not yet been announced.

With one cover or less per set, you are sure to find something you like from the FL three-piece; underlying punk melodies carry the bulk of their tracks, Corey Griffin (bass)’s vocals alongside Rachel Whitford gives the in-your-face push that it deserves. Rachel and Corey take turns singing lead depending on the song. With a collection of songs published on Reverbnation and an assortment of live videos on the band’s personal YouTube, it is clear to see that the group are made for live performance.

“Pneau 2” is the perfect example of what to expect in a live show, with Corey’s shouted vocals and aggressive stage presence over heavy drums by Thomas Morrison, their unique sound holds “DIY” elements that’re unique to Cardinal Slinky as a whole. With their strongest presence being captured in their hometown of Jacksonville, you are likely to find them performing in the area soon.

Listen to Cardinal Slinky below: