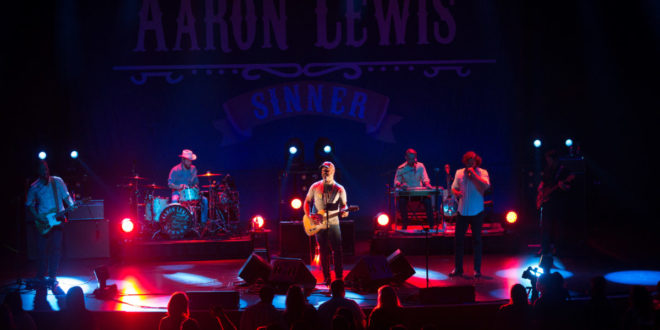 Country star Aaron Lewis, formerly known as the front-man of rock sensation Staind, played a near sold out show Thursday, August 17th at Hard Rock’s The Joint in Tulsa, OK. Lewis is on the road to support his latest album Sinner. Lewis made the crowd feel like home, dressed in jeans and a tee with a bar stool holding a lit cigarette, a cold beer, and his guitar in hand. The crowd brought their dancing shoes, and it appeared everyone was having a night to remember.

The entire night was filled with a balance between original content and Staind’s greatest hits. Lewis kept the crowd entertained with his small banter, one of many being of a story of his vintage guitar addiction. He rambled about the golden 1950’s beauty that he was about to pluck away, signed by many legends such was George Jones, Johnny Cash, Loretta Lynn, Waylon Jennings, and more. Later ramblings described his defining moment of his career with “It’s Been Awhile,” the story behind “Lost and Lonely” of checking into rehab, and a touching tribute to fallen solders when introducing “Folded Flag.”

A few covers found their way in the set list. When introduced “Keeping Up With The Jonesin'” Lewis said, “I didn’t write this next song, Jamey Johnson did. It does a pretty good job of telling how I got from where I was to where I’m at.” Lewis seemed to come alive during this performance, as the full band joined back in. He playfully poked at the audience, “If you didn’t want to hear me play this song, blame the person who yelled it out.” A beautiful rendition of Rascal Flatt‘s “What Hurts The Most” with dark undertones showcased his rocky, piercing vocals in the best way possible. His performance was phenomenal and received a well-deserved standing ovation, from what I could tell.

The night proceeded with heartfelt “Vicious Circles,” mesmerizing “Tangled Up In You,” and single “That Ain’t Country.” Crowd favorites included the sweet, acoustic “Granddaddy’s Gun,” “Sunday Every Saturday Night,” and closing track “Outside.” Illuminated by violet lights, Lewis gave one last hat tip and finished off with “Thank you very much. God bless and goodnight” as the crowd roared.

Aaron Lewis has proved he’s more than just a rock force. The night was an interesting take on the mix of genres, but that’s the whole reason for Music Existence. No matter the genre, music hits us all in a way that’s indescribable. Aaron Lewis is finishing his intimate The Sinner Tour before hitting the road Blackberry Smoke on the Sinner and Sanctified Tour this fall. Tickets can be found here.