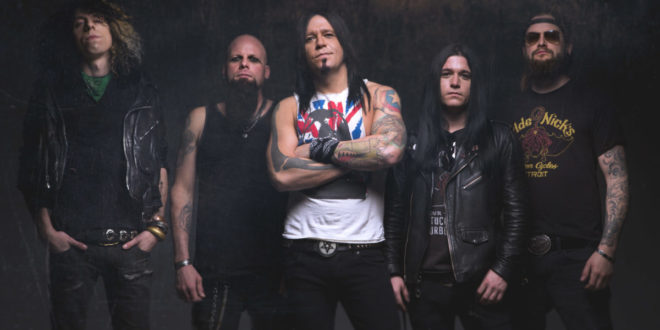 For over a decade, Bobaflex have had their fair share of hardships in the music industry. When they put fate in their own hands, they created their own label BFX Records and have been pursuing their passion nonstop. Following their 2015 release Anything That Moves, Bobaflex released their eighth studio album Eloquent Demons on August 25th. The West Virginia quintet created an edgy, dynamic record that shows they’re stepping in the right direction. Guitarist/vocalist Shaun McCoy, guitarist/vocalist Martin McCoy, guitarist/vocalist Dave Tipple, drummer Tommy Johnson, and bassist/vocalist Jymmy Tolland have revamped the 80’s rock style into something unique and like a breath of fresh air.

The cinematic experience begins with a cheering crowd as a deep, demonic voice goes into a poetic spiel. The gravelly voice unites his brothers as the soft drums and ambient piano take over. “The age of the demon is upon them… For tonight, we bathe and drink in fire.” After a few seconds, the cheering vanishes and we’re left for a split second of optimism. Second track “I Am A Nightmare” blasts in a rapid pulse with beautiful harmonies. This may be me knit-picking, but I feel the vocals are a little dim and layered behind the guitars. I want them to grab a hold of me and pull me in. The silver lining tells me this is a killer opening song for tour, and I envision crowds going wild to this upbeat anthem.

A favorite off Eloquent Demons is the not-so-subtle political track “Say What You Will.” While one could argue who the direct target is, there’s a can of worms that have been opened regardless. “You made us believe that you had a heart / Soon you can tear our world apart.” The gnarly riffs reflect the bittersweet and heartbreaking message of realizing what our country has come to and make you want to do something about the state we are in today. “There’s a few of us who disagree.” Any band or person who stands up for the nonsense that is taking place, sheds light, and wants to make a difference in that aspect will always earn my respect.

The first single off the record “Long Time Coming” is a must on any metal head’s list. It’s a hymn for the wicked that begins with ghostly vocals and slithering guitar riffs. The layers weave in and out, so while the track can feel like a march with its snare hits, the melody makes you feel like a sneaky snake preying upon you.

Not only is there variety in each song itself, the entire album has a cinematic experience palette. “Lights Out” picks up the funk and is a “get on your feet” track. While the song is pretty much about getting wasted, “Shut your mouth / And fill my cup / I’ll tell you when I’ve had enough,” the groove ran through my bones and had me moving. The galloping cymbals and well placed bass licks set a light mood. Slowing down the tempo, cynical track “Off With Your Head” made my inner bitter self laugh. We’ve all had that one person in our life, whether it be friendship, intimate relationship, etc. that we look back on years later and thoughts of “What was I thinking?” come to the surface. Some people just aren’t a clear match for each other, and this acoustic track isn’t afraid to just bluntly put it out there. “You’re the biggest mistake that I’ve ever made / And your heart’s gonna break / But I feel no shame.” “Real Sadness” left an uneasy feeling in my chest if attention is paid closest to the lyrics. While the lyricism is a little weak and comical, the story itself it tells made me sink. There’s no denying these feelings are real, real darkness that happen on a daily basis. “He said, I think you might want to sit down buddy / Ain’t no easy way to tell you / Something happened in the midnight hour / You better come with me.” The heartfelt composition of the longest track on the album fits its dark tone as it’s matched with heavier, distorted guitars and slow, intense vocals.

Bobaflex teased fans and released video of their “Hey You” Pink Floyd cover five months prior to the album release. What starts off as a dream-like rendition with strong acoustic guitar and hollow keys builds intensity halfway through; the band did the cover great justice. Check out this gem for yourself:

Eloquent Demons is worth the listen, especially with the diversity of tracks. There’s no doubt you can find at least one or two tracks you’ll resonate with. This was a nice surprise; it’s the first listen I’ve heard from Bobaflex. Now it’s time for me to dig into the older albums and see what else I can find!

You can catch Bobaflex on the road in support of Eloquent Demons throughout the U.S.
Dates and cities can be found here.

Be sure to pick up a copy of Eloquent Demons:
Amazon | iTunes | Website

Kitchen Designer by day, Concert Photographer/Writer by night. 24. Arkansas.
@tsheaphoto
Previous Album Review: PVRIS – All We Know Of Heaven, All We Need Of Hell
Next EP Review. The Color Wild: Clean