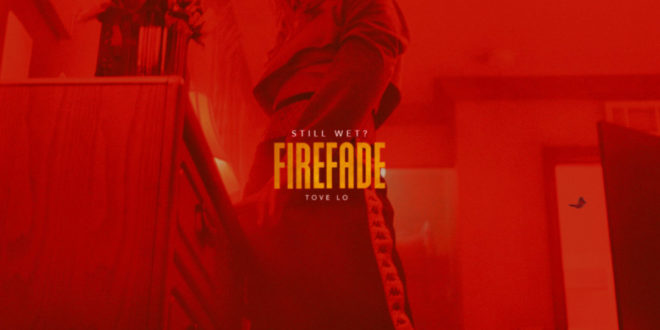 “Fire Fade is for my fans. When the fairy dust starts to wear off and you can’t fully reach the highs anymore — though you’re desperately trying to — it’s a struggle with the mind.” Tove Lo explains. “It was also the most physically challenging thing I’ve ever done. I’ve never been in so much pain on a shoot before! But it was worth it and was such a huge thing for me to be able to do for this chapter. Can’t wait for my babes to see it!!”

The release of “Fire Fade” comes just ahead of Tove Lo’s highly anticipated tour with Coldplay, kicking off September 23rd in Seattle and culminating with a performance on October 8th in San Diego, bookended by a number of headline dates. Tove Lo has been touring non-stop since the release of Lady Wood last Fall starting with the first leg of her Lady Wood Tour and numerous well-received festival appearances, including Coachella, Governor’s Ball, Bonnaroo, Lollapalooza, Osheaga, and Outside Lands. Tove Lo will also appear at Austin City Limits this year, playing both weekends—October 7th and October 14th. See all tour dates here.

Lady Wood is the long-awaited successor to Tove Lo’s landmark debut album of 2014, the RIAA platinum Queen Of The Clouds. The album included “Habits (Stay High)” the career-defining 5x-platinum global #1 hit that introduced her to U.S. audiences, and the triple-platinum follow-up, “Talking Body” (#3 on Billboard Pop Airplay, #12 on the Hot 100). Tove Lo has surpassed 1 billion Spotify streams, and also been the featured artist on tracks by Nick Jonas (“Close”), Coldplay (“Fun”), Years & Years (“Desire”), Broods (“Freak Of Nature”), Flume (“Say It”), and Alesso (“Heroes”).

Tove Lo has been hard at work on the follow up to Lady Wood. Stay tuned for more details coming soon!