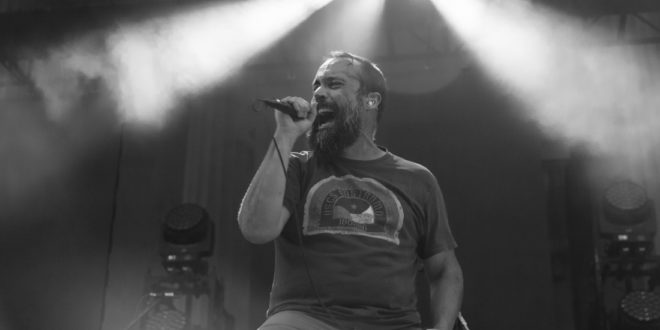 The last stop on tour with Primus, “This has been one of the best tours we’ve been on. Scratch that, this has been the best tour we’ve ever been on!”, Clutch brought their high energy and loud rock ‘n’ roll music to the majestic Greek Theatre in Berkeley, California. Opening for Primus for the last month traveling across the country, Clutch brought a set to the Greek Theater that every fan would love. Concert goers arrived early to catch these four do what they do best, rock your socks off! Holding up signs asking Clutch to play certain songs, Neil Fallon, their fearless lead singer, assured them that they would hear those songs and that they wouldn’t be disappointed.

With the overcast evening turing into darkness, Clutch jammed through sixteen songs from their eleven albums released over the last twenty-four years. As the smoke filled the sky, Clutch kept jamming and showing the crowd why they’ve been able to do what they do for so long. Tim Sult and Dan Maines worked their magic with their guitars while Jean-Paul Gaster slammed on the drums with all his might. Clutch sounded as good as ever.

A special surprise near the end of the set when Les Claypool came out with his stand up electric bass and pig mask to join Clutch for their song Earth Rocker. It was truly a great experience to see them perform live. If you ever get the chance to see Clutch live in the future, go check them out. They love what they do and it shows when they’re on the stage rockin’ out.

Previous You Look So Good
Next Primus at the Greek Theatre in Berkeley, CA on 08/18/2017