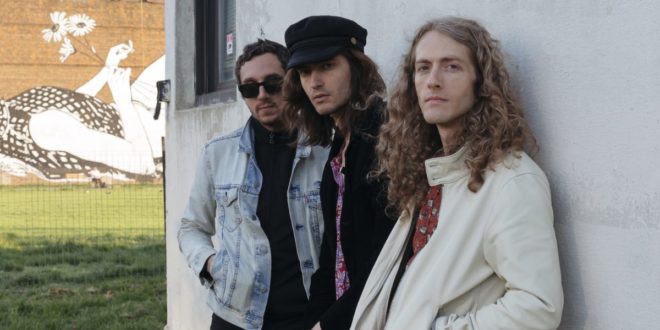 New York City’s music scene is always bringing out some of the best music you can say globally. The scene can be very much saturated but you can easily spot the gems that’s where you present to you, New York City’s kickass trio, The Midnight Hollow. The band consists of lead singer and multi-instrumentalist Spencer Draeger, Andrew Segreti on drums and Matt Leibowitz on Bass. Their previous albums and releases lean more towards psychedelic pop with an edgy twist however now the band is taking a definitive turn into a more rocker sound that encompasses each member’s personal and unique voice into the music.

Before their newest release this week, the band has not released new music since 2015. A lot has changed for the band and with much anticipation for new music, we got a chance to speak with the band on a nice sunny windy evening in Greenpoint, NY.

ME: For those that don’t know your music, can you introduce yourselves, how you guys met and formed the band?

Spencer: I met Andrew first before I met Matthew. We met at a bar in the East Village, it’s not a romantic story but one many have, I guess. Then one thing led to another and then we ended up in a practice space together banging it out. I had moved here from San Francisco and I had some songs that we started working on, Andrew and I. Before we knew it, we had a show booked and Andrew knew Matt was like “I got this bassist who is going to fill in” and then we all kind of just rolled with it, played our first show, and it’s been that way ever since. The Hollywood story would be that I wanted a new beginning and I moved to New York and wanted to make the most kick ass band in New York, it’s a coming of age story, PG-13.

ME: Talk to me about your newest single, Peach Juice.

Spencer: I wanted to make a song about women and what they have to deal with on a day to day. Actually, all three of us used to bartend and that’s where I really noticed kind of how the night evolves and people get a little too comfortable, looking and saying things, it’s basically about women being catcalled. It was something I’ve always wanted to put into a song because I hear girls talking about it all the time and seeing it first hand numerous times and continuously made an impact on me. As far as the song goes musically, I started just wanting to make a rock song that wasn’t a typical love song, I wanted the song to be a juxtaposition of that. Like these terrible guys chasing these women.

Spencer had finished Peach Juice and played the track to Andrew while they walked shivering from the L train to the ACE train during the coldest days of New York City’s blizzards. Instantly Andrew went, “yes, this is awesome!!” The song takes a feminist stand to add to the fuel of equality which is reflective on the song, sonically. It has a more upbeat and rock n roll band vibe to it. As Spencer says, “It’s a perfect hybrid of us three and it definitely a turning point.”

Spencer: Men have always dominated the music industry since beginning of time, the studios, engineers, producers, But in the recent years it’s starting to change from what i’ve seen and hopefully it actually is. From the producers to publicists, it seems more women are taking on those roles which is awesome. Women are more effective than men and get shit done, you know. Also, there seems to be more female fronted bands like Savages who are super inspiring and kickass like when I listen to them I don’t think “oh these are girls, I think damn this is a kickass band who happen to be women” I think that would be so cool if people all would just think a band is cool regardless of whether they’re women and still be visceral, controlling and dominating. I think we are getting to a time where that’s more the case however it stills need to be prominent.

Matt: I feel like with women, it’s more about the music instead of guys fighting over things and proving “yeah, I’m the man” which is stupid.

ME: New EP or album on the way?

Spencer: We have about 10 songs ready to go but I think we’re just going to release some singles and perhaps when 5 or 6 of them are out we’ll put together an album and maybe record new ones on the way. We waited a long time to release stuff, we reconstructed the band, and just went through a lot of changes between the last album and now so I think it’ll be more comfortable for us to release a couple singles. We are talking about the next one and just see how people respond and go from there. We are definitely due though for a tangible release soon.

ME: Favorite type of show to attend and does that influence how you put together your live show?

Andrew: My favorite type of show are really loud ones where I can feel pounding in my chest. I think over the years of seeing numerous of shows from basement shows to large stadium shows, the ones that affect me the most were the ones that got raw and real with people or that put on such a phenomenal show like a lit match that was deniable that commanded attention. Thats all across the board in different types of music. My goal has always been play like how you want to see it and hopefully that will have the highest impact. I’m always just concerned with commanding a room. I just really enjoy bands who are very much like “we’re on fucking stage and you’re not going to pay attention to anything else because you can’t or you leave”

Spencer: We are inspired by bands who are authentic, someone that isn’t afraid to follow whatever is going on around them, be flawed and go with things because so many people are concerned with being perfect. We are humans who are flawed and we are proud of that.

Matt: Shows where people play with their heart and soul whether it’d be a jazz band or flipping knobs.

Spencer: Yeah, like I like electronic, rock, jazz, all sorts but the common denominator is if it’s authentic and truly being who they are.

Andrew:Music comes from the soul. It’s not about what you look like, etc, it’s not about these variables that you can’t control like with music you can control. You create it from nothing and form what is deep within you and what you’re feeling which is honest if you’re doing it right. It’s not like with what I look like is my art. For me, music is an output and it comes naturally to want to lay down music and create. I don’t think anyone understands where it comes from and that’s what makes its mystical, magical, cool, mysterious and make life exciting. To have a little mysterious, to not know where you’re going, and then to end up where you want to be.

Matt: Music encompasses colors, sounds, etc it all depends on where you fall on the spectrum

Andrew:I feel like I could write novels on this but I don’t know if i can give you a soundbite. Music permeates all of existence. It’s a channeling that we do as individuals and as a group. True alchemy happens in music. Like a band is always larger than a sum of its part. Whether it’s a band or an orchestra or a choir, something happens that resonates on a human level not only emotionally but intellectually and physically that transcends physical being and can get you out of temporal existence that transcentation that becomes addiction and you kind of always want to be out of time. Because music happens linear in time, it’s where you can pull and push and make things faster or slower and play with the sense of time. It’s like when you leave a concert, and you realized the time and you have to be home in an hour and reality hits but in music you disappear.

Matt: You can join Andrew’s drum circle every Saturday and Sunday.

NY folks, catch their live gig next Wednesday, September 20th at the Knitting Factory in Brooklyn.

photo based human in nyc and phoenix. sneaking in my camera everywhere I go.
@https://twitter.com/ginabgarcia
Previous Interview: Brendan Frey of Hostile Array
Next Interview: Honduras