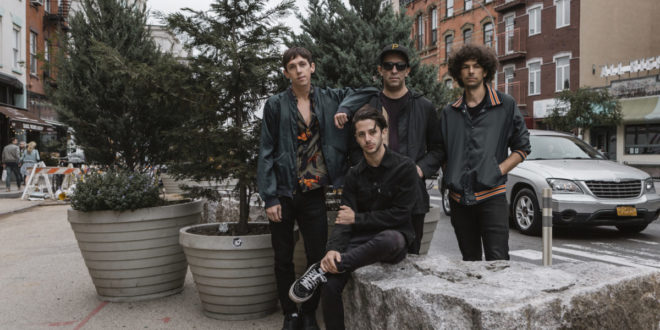 Honduras are no newcomers to the NYC scene, they’ve made close-knit friendships with other musicians and bands in Brooklyn and Manhattan and love regularly checking out new music by attending as many gigs as possible.

They’ve played practically every venue in the city and hold a special place in the DIY music scene. It’s their gritty rock n roll sound that get crowds rowdy without it being a friday night to have a good time.

On June 1st, Gina Garcia was able to speak with the band before their set at Baby’s All Right in Brooklyn.

ME: Describe the bandmate next to you.

Patrick: This is Josh and he plays drums. He’s loyal, trustworthy, hardworking, and a huge fan of LCD Soundsystem.

Josh: Tyson is to my left. He plays guitar and keyboard. He loves his dog, he loves taking things apart and building them again, he is a problem solver, he loves lakes, cars, his girlfriend, his family, and the countryside.

Tyson: This is Pauly to my left. He is a bit of a social fly, everyone in Bushwick knows him basically. He’s a bassist player and bartender. He really has a unique style and when he joined the band he was the guy who gelled everything for us.

Pauly: Next to me is Pat/Patrick. He’s our singer and rhythm guitar player. He’s one of my closest friends. He’s a good avid listener of music and is always looking for new music discoveries and ways to make yourselves a better band. He’s a fellow bartender as well as a social fly.

ME: How was the recent tour with Acid Dad?

Patrick: Yeah it was pretty solid. It was a short run, probably two weeks but it was great fun. The cities that stuck out to us were Toronto and Chicago, awesome locations and the crowd response seems to always be great in those cities. Acid Dad are great guys and it was fun to share the road with them.

Tyson: Madison, Wisconsin was a new cool place to play.

Josh: I was surprised with the turnout and reception but yeah it was cool and fun to be out on the road.

ME: Being based here in NYC specifically Bushwick. Do you guys have a favorite local venue?

Patrick: Myself and Pauly work at a DIY venue in Bushwick called Alphaville so we work and play a bunch of times so I’d probably say, Alphaville.

Patrick: Yeah! We really like B Boys a lot. There’s Rips, who is another guitar type band like ourselves, there’s Roya, who just signed to Burger Records and their newest release is really good. O! There’s also Junk Boys that’s very dirty rock n roll. There’s a dude named Russell in that band and he’s in like 16 other bands, its crazy. He’s the bassist player of every other band in Bushwick, pretty much.

ME: New music coming out soon?

Tyson: Right now, we are demoing so individually doing our own demos with the help of our friend Matthew, who worked with Sunflower Bean. He’s a homie. We have enough songs for an album release but we figuring out the place and when to put it out. It’ll take some time to put it out but we might release a 7 in with two songs.

Patrick: Maybe like a two week tour in the fall. We have things in mind, at least for right now we might be doing a fall tour in the West Coast.

ME: Favorite thing about the NYC music scene?

Patrick: It is definitely over saturated but with comes a pool of amazing talent. You also get to absorb in all sorts of different types of music, experiences, friendships. It’s cool to have friendships and people in various art circles in New York.

Tyson: Like I work at a venue at plays like I normally maybe wouldn’t be exposed to like Afropunk and latin groove type music and it’s amazing to see them play at 2am with full dancing crowds. I wouldn’t be able to experience that without being here in New York. It’s definitely a unique scene, community, and place to be.

ME: Being exposed to a lot of music and art. When you guys check out different shows, does that have any bearing on how you guys perform?

Patrick: I think always, every performance influences or impacts in all sorts of ways. Like where I work, I see so many bands and artists play that you can help to absorb that in and sometimes I’ll do a voice memo of a vocal melody that was cool.

Thank you to Honduras for having a chat!

photo based human in nyc and phoenix. sneaking in my camera everywhere I go.
@https://twitter.com/ginabgarcia
Previous Interview: The Midnight Hollow
Next Gallery: Honduras at Baby’s All Right in Brooklyn, NY on June 1st 2017