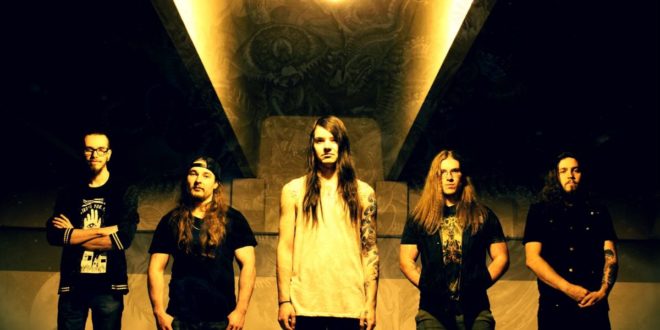 Ontario-based progressive death metal outfit Becomes Astral recently released their album Paleblood Sky, which includes six pulverizing tracks, recorded and mixed by Christian Donaldson and Marco Frechette at The Grid. Upon the release of Paleblood Sky, the band will set out on their album release tour throughout Canada, starting on the Eastern leg with Eye of Horus and later adding Into Eternity for the Western leg of the tour. Becomes Astral recently partnered with Metal Underground for the exclusive premiere of the album’s title track, “Paleblood Sky.”Written as an introduction track to the highlights of their forthcoming album, the lyrics loosely frame a Bloodborne theme, which is a game that both visually and conceptually inspired the band to write two very lengthy full songs. “Paleblood Sky” was also where vocalist Cam Sherer experimented with an unfamiliar writing style, creating the pulverizing track.

Becomes Astral is a progressive death metal band based out of Guelph, Ontario. Formed in the later months of 2013, they quickly got to work on releasing their debut EP, The Mind, which was released in October 2014. The Mind was recorded and mixed by Don Levasseur at Atlantic Studio. After their debut release, Becomes Astral toured heavily for the following year, covering west coast Canada, and two Ontario and Quebec tours. Playing steadily since, Becomes Astral has made themselves a force to be reckoned with, allowing the band to sell out half of their last tour in Ontario. In early 2016, Becomes Astral took a break from playing live to write a full-length record, and returned to shows in late 2016. In December 2016 the band entered The Grid Studios in Montreal, QC with Christian Donaldson of Cryptopsy as a producer and came out with a piece of music they are proud to call their own, Paleblood Sky.

Paleblood Sky was released on August 18, 2017 and is now available here.