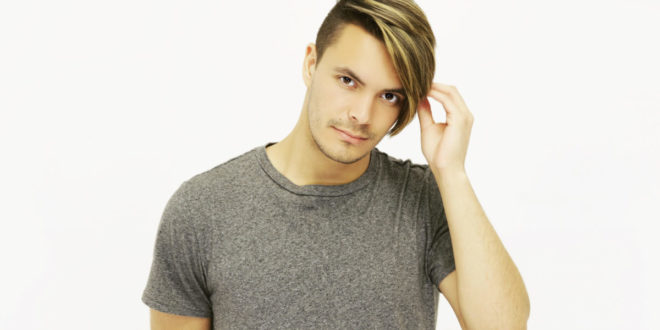 Two months ago Danny Padilla dropped latest single “Too Bad.” He may be a familiar face on YouTube with a variety of videos consisting of music covers, impersonation covers, improv skits, and everyday/personal videos. He’s taking a dive into the music scene with his original music, and his newest single isn’t one to be overlooked. The electro-pop track dives into the toxicity of a damaging relationship and being stuck in wanting and loving the other person.

Patiently awaiting Padilla’s EP release, Music Existence had the opportunity to catch up with Padilla in midst of L.A. traffic about songwriting, being an inspiration to others, and even describes his perfect date.

ME: You recently premiered your single “Too Bad” which dives into the topic of toxic relationships. Do you find the songwriting process difficult opening up those type of wounds again?
Yeah, I think with this song in particular, it was almost more than difficult. It was kind of nice. It’s my way of saying a lot of things that I feel like I wasn’t allowed to say. Especially in the relationship, I definitely wasn’t able to say any of that stuff. (laughs) This song in particular, it was really nice; I feel like I was finally able to get over it once the song was out. There’s something cool about putting it out into the world and actually feeling like, “Ok, cool. That’s done. Next chapter.” Obviously when I sing and perform it, it brings me back. But I think as far as my overall life, it’s been nice since then. I’ve been able to… It’s kind of nice knowing the world gets to hear about it. I don’t know, there’s something kind of weirdly nice about that. I can’t really explain it. It’s difficult in a sense, but more than difficult, it’s a very nice feeling. Music functions as a way for me to say things I feel like I might not necessarily be able to say in real life. I think that’s what’s nice about this one. It’s me reaching into the pass hold even though it’s still affecting me and kind of being okay with letting it affect me, I guess. I’ve finally been able to be more open with my friends about how it’s affecting me. I thought that I was over it, but I’ve got these certain days where I’m not, so…

ME: How would you describe your sound to anyone who hasn’t heard your music before?
One thing that I don’t try to do is place myself into some sort of genre per say. Especially because it feels like every song is different for me. I would say that I’m a singer-songwriter but that I have a lot of electronic influence. I like the idea of adding electronic samples into my music. The motive aspect of what I am trying to create comes from my singer-songwriter background. You think I’d have an answer for this by now. (laughs) I’m working toward any opportunity to say “yes” to something different, but I take a lot of influence from Ed Sheeran and John Mayer. I like to add a lot of the pop stuff into it and lately it’s been LANY, if anything. I’d say it’s a really honest interpretation of what I’m going through, and hopefully people can relate to it.

ME: You’re also a YouTube personality, which I’m sure you’re aware of (laughs) with your biggest following being the improv scenes, as well as doing covers. How did the improv stuff originate?
The overall impersonation concept began in 2014. I kind of realized that YouTube was getting to a point where there so many people doing exactly what I was doing as far as creating covers, that I thought it’d be really cool to create something outside-of-the-box. My friend [Mason] knew how to do impersonations, and I thought, “Okay, let’s not take ourselves super seriously this time.” So, we did a cover where we just tried to mess the other person up to the point where it gets comedic, blending music and comedy together. He has an improv background, and I have a little of an improv background, so we were able to improvise our way through it. Even if the impersonations were kind of sad, we were able to just laugh it off and keep going. I think people really enjoyed it, because you could see us performing it in real-time. Performing it live and knowing we had no real planning behind it made it an organic experience that people enjoyed. It got really popular on Buzzfeed and Reddit. I had no idea it would become so popular with the first video getting 3 million views. That kind of video concept paved the way for me to be able to try to do this for a living, which I’m very, very grateful for.

ME: Since you didn’t expect to get the amount of recognition that it received, how does it feel to be such an inspiration to others?
Oh man, it’s absolutely incredible. I’m very interested in other people, and the fact that I’m able to successfully affect people in a positive way has been absolutely incredible. I take ever chance I can to respond to people on social media, to make sure everyone continues to feel that I’m caring of them. Especially when I get to meet people in person at YouTube conventions… it’s one of the coolest experiences ever. It’s kind of like a self-esteem boost, too, if I’m ever feeling down. One of the biggest goals I have in life is to have is to affect as many people as possible in the most positive way possible. So to have done that to the extent that I have so far is a really nice sign.

ME: You do many cover songs. What are some constants that you go to whether you’re singing in the shower, driving in the car, or wherever you’re at?
That’s a good question. (laughs) It definitely changes depending on what I’m currently listening to, but I do have some favorites that I always end up singing. Usually the ones on the slower side. I’ll sing a lot of Coldplay’s “Fix You.” It’s one of my favorite songs to sing in the shower. Anything with some John Mayer stuff. I have two friends where we’re in the same a capella group together, so we’ll bust into song anywhere we go. It’s always cheesy stuff like “What Makes You Beautiful” by One Direction, “All Star” by Smash Mouth or “Since U Been Gone” by Kelly Clarkson. I think it came on the radio once, and we figured out how to harmonize to it. When I’m alone, it’s more sad and pretty stuff. When I’m with friends, it’s more upbeat.

ME: What are some words of advice to anyone following their dreams?
Actually, I have something that I learned from my friend’s parents. When you tell someone about your dreams or aspirations in life, if they aren’t blown away by how crazy your dream is, then you aren’t dreaming big enough. When you tell someone what you want to do in life, and they aren’t “wow-ed” by how crazy it sounds, yes, you might be selling yourself short. A lot of it is hard work, but you have to make sure it’s something you actually enjoy. If it’s something in the entertainment industry, especially if you create your own schedule… if it’s something you don’t really like doing, best chances are you aren’t going to put your best foot forward. Pick something you’re passionate about and go for it! Do what you love and love what you do.

ME: What are some of your short and long-term goals?
Shortest term goal is probably releasing a new song as early as the end of this month, maybe next month. I’m looking into releasing an EP that encompasses all the music I’ve put out so far with one or two new tracks. Hoping to release that in October or November. I want to start doing shows and touring. That’s something I’ve been really, really interested in doing. I’m really excited to do that stuff in the near future. As far as long-term goals, my biggest long-term goal is to ensure that I can affect as many people possible in the best ways possible… My biggest goal is to make a living doing what I love out of music and YouTube, kind of being some sort of beacon of hope in this world. Someone who is unbelievably positive and helping other people out.

ME: Beautiful. We can’t wait. So, I always like to do a little play on words. It’s “Too Bad” that someone missed out, but maybe someone else has a shot. Describe the perfect date.
I would have to say I really, really enjoy the idea of going out to dinner; I’ve been into Indian food lately. Taking a beautiful female out to Indian food or wherever she may want. I’m all about simplicity, and I enjoy and love watching TV shows with people. If this person was interested in watching “Game of Thrones” then I would take them back to my place, and we’d watch like three or four episodes. That’s one of my favorite things to do: refer shows to people and binge watch with them. Maybe the next day I would ever take them on a picnic or something. I think picnics are cool, but obviously you wouldn’t do a picnic and dinner. (laughs) Especially being a first date, simple stuff is better to get to know the person on a first date rather than going to a movie where you just sit in silently for two hours. Then maybe the first kiss the next day or that night, we’ll see. In a perfect world, then yes, definitely.

ME: That’s all I’ve got, Danny. Is there anything else you’d like to say to your fans?
Just don’t forget to be dope! (laughs) Just be on the lookout for new stuff, and follow me on YouTube, Twitter, Snapchat, Instagram, etc. Make sure to be nice to people. It seems so basic, but try to make other people’s days. It will weirdly make your day.

Kitchen Designer by day, Concert Photographer/Writer by night. 24. Arkansas.
@tsheaphoto
Previous New Music from T LUXX – “Your Love is My High”
Next Thirty Seconds to Mars Return with “Walk on Water”