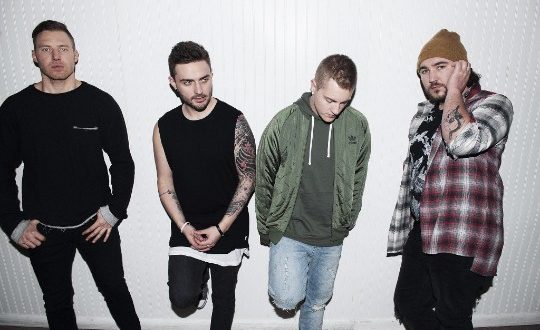 Detroit, Michigan’s I PREVAIL continue their meteoric rise in the rock world with the music video for “Lifelines”, the title track off of their hit record released last October. The release comes on the heels of their Rage On The Stage tour announcement, featuring metalcore scene favorites We Came As Romans, The Word Alive, and Escape The Fate providing support. The North American tour kicks off on September 20th in Oklahoma City, OK and concludes in Des Moines, IA on December 2nd. The full routing can be viewed below.

Tickets can be purchased here.

In addition to the new video, I Prevail has also dropped the price for the debut album Lifelines to $7.99 on iTunes in honor of the new music video and their upcoming tour. You can purchase the album here.

“Lifelines” shows I Prevail’s dynamic brand of rock, combining the grit of attack-oriented guitarwork and breakdowns, electronic key instrumentation, and the complementary dual vocalist performances provided by clean vocalist Brian Burkheiser and harsh vocalist Eric Vanlerberghe. “Lifelines” is a song about resilience and endurance through tough times, so it’s fitting that the video was shot in Detroit at the Downtown Boxing Gym Youth Program, an organization which helps at-risk youth with educational tutoring and discipline through boxing.

In the words of singer Brian Burkheiser, “Lifelines” is no doubt our proudest video to date. We set out to create something that embodied what “Lifelines” as a song and as an album really meant to us. It centers around the harsh reality that life doesn’t care about what you have planned. The biggest moments, whether ones of amazing opportunity or painful loss, are coming no matter what. How you choose to respond makes you who you are. That’s what we wanted to express. This video became even more special to us when we had the chance to turn our creative process into a way to bring awareness to an amazing cause. The video was filmed at a magical oasis of hope called the Downtown Boxing Gym in Detroit. With great inspiration and support from the owner Coach Khali Sweeney. Coach Khali and his team are straight up HEROES, changing the lives of young people in Detroit, a place where it is greatly needed. They bring kids in from the Public School system and provide a safe environment with a focus on education first, using the self discipline of reading books together with the camaraderie that a sport like boxing. They build bodies and minds with an eye to the making of future leaders. There is no such thing as a “bad kid” to this organization. To see the positive impact this is having first hand was truly inspiring and something we couldn’t be happier to support. They are truly making positive lifelines  and we are honored to have worked with them in their home base.”

The “Lifelines” video release builds on the excitement that has followed I Prevail, seemingly since the Detroit rockers formed in 2013 and has become impossible to ignore over the past year. Last week’s announcement of Rage On The Stage follows their massive run on this summer’s Vans Warped Tour, during which the band played the Journey’s Left Foot Main Stage. Propelled by the rise of their power ballad single “Alone,” which has invaded the Top 5 of the Top Rock Songs Chart, Lifelines has been able to move over 170,000 units since its release last October, continuing to remain in the Top 20 of the iTunes Rock Albums Chart.

The Downtown Boxing Gym Youth Program meanwhile currently serves more than 130 students between the ages of 7 and 18, with an ever growing waiting list. More than 75% of the enrolled students live within a 3-mile radius of the gym. Many are residents of the nearby public housing units. Their families benefit by witnessing and participating in our hands-on coaching methodology. Through education, athletics, mentorship and intervention, the Downtown Boxing Gym empowers Detroit students to be positive and productive members of society.