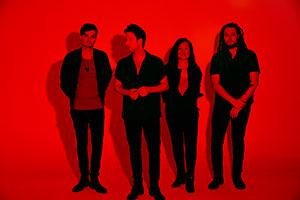 Elliot Root’s debut album Conjure doesn’t come out until August 25th,butthis reviewer can promise music enthusiasts that once you get it in your hands and into your ears the anticipation will have been worth the wait.

“Take Your Money” has a very unique feel to it and really establishes the sound that Elliot Root will soon be equated with, alternative rock but with a folk flair especially in the storytelling and lyric aspect. The song is mostly quiet with a sparse backbeat, but lead singer Scott Krueger’s vocal delivery is strong and shows his range as he reaches for his falsetto. Soulful and haunting and with a chorus that is very catchy it’s one of the strongest songs on the album. “Take your money and leave it on the table/I don’t need your things,” Krueger sings with passion that will sweep listeners even closer into the story he is weaving. The quiet instrumentation allows Krueger to shine but also for the words to take center stage. Very quickly Elliot Root prove that they are in total control of their songwriting and production and know how to balance a song out to highlight its best aspects.

Immediately following “Take Your Money” is “Lost Man Running” which is a glorious tune that really showcases Krueger’s ability to emote and tell a tale that will resonate with listeners. Piano is the backbone of this particular track, and the total instrumentation is fuller here, but it matches the tone. The way the song builds and rises to the chorus in which Krueger lays all his emotions on the table is a thing of beauty and if there is one song on the album to listen to this is it. It feels like it would fit right in perfectly on both alternative and pop radio stations as it feels mainstream but also has a slight edge to it. Krueger steals the show here, holding nothing back and showcasing that Elliot Root deserve to be a household name. For anyone who likes good quality passionate music, this is the track for you. It’s grand and flourishes in all the right places creating a listening experience that will take your breath away.

“End of our Days” is over five minutes long but it never drags, in part due to Krueger’s ability to captivate listeners from the second he opens his mouth to sing. The instrumentation is very interesting here, layered, and the whole tune has an early 2000s sound which works so well for the band. The lyrics are a bit muddled and hard to make out but it doesn’t take away from the lushness of the tune. By the time the chorus rolls around, and Krueger croons “I will always be your man,” one can’t help but to fall deeper into the spell that Krueger has already cast on listeners in previous songs. Yes the chorus is the strongest part of this particular track, but the whole thing is a soothing experience that one won’t want to pass up.

On a whole the album is wonderful and very consistent, there are a few minor missteps like “Hold On” that doesn’t grip and “Like the Sun” which is a little too peppy for the rest of the album, but overall this is an impressive debut and this reviewer for one can’t wait for everyone to get a listen.