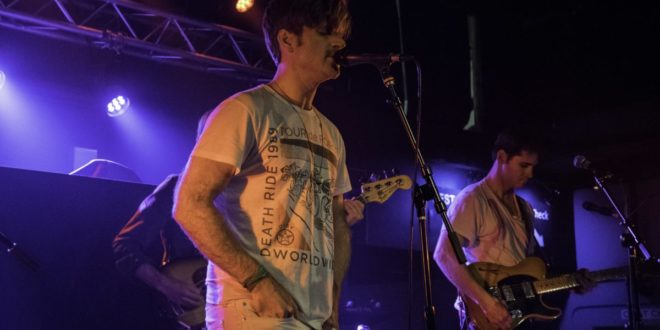 NYC-based VHS Collection have released thei newest track, “Fire“. The track, recorded in London with Chris Zane (Passion Pit, St. Lucia), is from their forthcoming debut LP. “We all have a devil on one shoulder and ‘Fire’ is dedicated to him,” explains the band’s Conor Cook, “The song celebrates our evil ways. It sonically blends synths and guitars in a way that is both nostalgic and modern. The groove of this tune is one that you don’t typically hear these days, which sets his track apart.” The band’s James Bohannon explains that “Fire paints a descriptive vision of rebellion, religious confines, and pent up desire. It’s a seedy jam that has elements of classic southern rock, evolved into our signature synth/guitar soundscape.”

VHS Collection is a rock band from New York City that has gained a reputation for high energy live performances and a unique blend of rock, electronic, and disco influences.

VHS Collection’s songs have been streamed over 20 million times on Spotify and the band has seen festival performances at Lollapalooza, Austin City Limits, Bunbury Festival, and Okeechobee Festival in the last year.  VHS also sold out a headline show at Bowery Ballroom in February and Music Hall of Williamsburg in June, in addition to sold out club dates throughout the mid-west and throughout the west coast.  The band has released two EP’s to date and will release its first full length record late this fall.

“Lean” the single off the band’s first EP hit #8 on the Spotify Viral Charts last January.  “Waiting on the Summer” the single off of the band’s 2nd EP Stereo Hype hit #14 on the Spotify Viral Charts and has been streamed over 12mm times to date.  The “Waiting on the Summer Dave Edwards Remix” was also #1 on Hype Machine in April.

VHS Collection got their start in the winter of 2014 but the three members, James Bohannon, Conor Cook, and Nils Vanderlip have been playing music in one form or another together since they were kids.  Conor and James grew up across the street from each other in NYC and attended the same grade school where they began jamming on acoustic guitars; Nils and James met in high school, where they started their first band together and recorded an album.

Years later, with all three members back in NYC, VHS pulled together a collection of electronic leaning rock-influenced bedroom recordings and posted them on Soundcloud.  Encouraged by the volume of hits the tracks received, VHS began performing a live set at friends’ parties and around NYC’s small clubs.  2015 saw multiple sold out nights for VHS at the Lower East Side’s indie-rock launching pad, the Mercury Lounge.

2016 saw the band’s first major festival performances at Lollapalooza and Austin City Limits, in addition to sold out club dates on both coasts in addition support dates with Bloc Party and Powers.

VHS has remained independent and is self-managed. They they are able to reach a growing audience via Spotify and other social media outlets without a label, and have also built a live following by word of mouth.  The band sold out Bowery Ballroom and NYC’s 700 cap Music Hall of Williamsburg in the last 6 months and also played several major West Coast headline dates, including LA’s famous Troubadour.