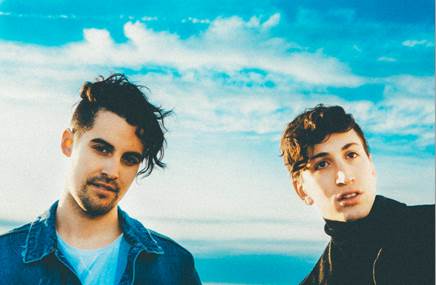 Album Review. Secret Weapons: As the Setting Sun Comes Crashing Down on Me.

New York City duo Secret Weapons are getting ready to release their debut full length album As the Setting Sun Comes Crashing Down on Me on August 18th. Song after song, it is a spectacular splash into the music world that is sure to impress both listeners and critics alike.

The LP opens up with “Ghost” which is the strongest tune on the album. With horns blazing, right from the start, Secret Weapons create a hook and a groove that will make listeners want to dance and immediately take notice of their sound. With a bit of an 80’s throwback it also draws from the best of today’s music scene. Think Daft Punk’s “Lucky” or anything Bruno Mars. “Just a ghost inside a shell/I know you so well,” the chorus sings and once heard it is impossible to get out of one’s head in the best way possible. This song has the potential to make Secret Weapons household names as “Ghost” could be a huge hit on top 40 radio. Tapping into an electronic sound that is popular these days, while also having one foot in the past, Secret Weapons show right out of the gate that they know how to create a massive hit. If there’s only one song to listen to on the album this is it.

The hits keep coming as one glides into “Power.” Again balancing the modern and retro sound, this song has a funk vibe with a splash of Stevie Wonder’s “Superstition” on the verses. The chorus is repeated over and over again, one simple word “power,” in a charged up chanting manner and it works because there is so much energy behind it. The lyrics are fun such as “May sound like a son of a gun,” which comes off as unexpected but cool and more traditional lines like “Mama said don’t light this spark unless you want to feel the heat,” and the combination of the two makes this particular track standout, as well as a background instrumentation that has a bit of a nod to “Edge of Seventeen.” The passion throughout “Power,” is what makes this track undeniably superb and will have listeners singing long after the song has ended.

“Lifeboat,” has a cinematic feeling to it with a Young the Giant or Kings of Leon vibe, but of course Secret Weapons put their own spin on the song making it feel original. Crashing and soaring throughout, continually building up and rising, this is the type of song that is meant to be played live in a stadium to crowded fans as an anthem. Fast paced and grandiose, with a spoken word portion that sets it apart from other tracks on the album, Secret Weapons have created something that is not only epic but a tune that might be bigger than the album or the band itself. I dare any listener to not get swept away by the intensity and passion of the tune, it is that good.

While the album is 99% hit after hit there are just two slight missteps. “Konichiwild” feels a bit too commonplace and doesn’t measure up to the other songs on the album, while “Waiting for Answers” again, feels subpar. But when you balance that out with cool tracks such as “Betty You Go Wrong/Midnight Song” one will quickly see that the good outweighs the bad.