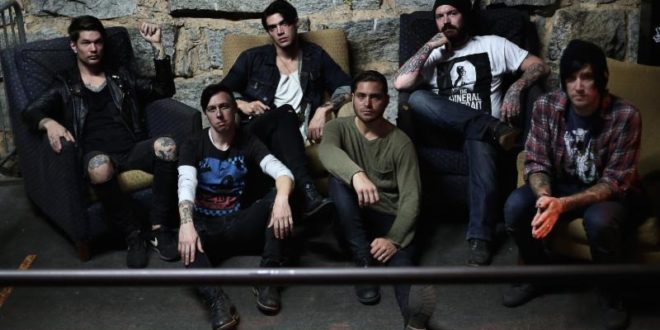 The illustrious North Carolina based Rock/Sweetcore unit and Revival Recordings artist, Alesana are kicking off their highly-anticipated Hero With A Thousand Faces Tour today alongside special guests Eyes Set To Kill, fellow Revival Recordings artist Alteras, Outerloop Records artist Lakeshore, and The Amatory Murder. The tour follows their successful run in February where the band performed their debut LP On Frail Wings of Vanity and Wax in its entirety.Shawn Milke of Alesana and Revival Recordings Director of Creative Production and President of A&R, had this to say about the forthcoming tour:

“We are very excited to announce the Hero With A Thousand Faces Tour.  On the heels of our On Frail Wings of Vanity and Wax anniversary tour, we thought it would be fun to perform a more diverse set featuring songs from our Annabel trilogy and The Decade EP.  Come hang out and get rowdy with us!”

The tour kicks off today in Alesana’s hometown for a special Revival Recordings show with the band and Alteras only, performing in Raleigh, NC at Kings. The band’s will meet up with the remaining tour mates in Lancaster, PA at Chameleon Club on August 4th. The tour will make its way up the east coast before heading south where it will conclude in Atlanta, GA at The Masquerade on August 19th. Tickets are on sale now, fans can head over to RevivalRecs.com for more information!

MORE INFORMATION ABOUT THE ANNABEL TRILOGY:
Just a few months ago, Alesana announced their 2nd edition to their first short novel Annabel, a story that is based around the band’s three concept albums, The Emptiness, A Place Where The Sun Is Silent, and Confessions. Originally releasing in August 2016, Alesana immediately sold out of all 750 produced novels and are ecstatic to offer a 2nd edition. The 2nd edition Annabel short novel Vinyl Bundle package will include: the 2nd edition book of Annabel including a note from the writer’s desk, never before seen sneak peek at Chapter One of the next book, Madeline, limited edition Annabel t-shirt, The Annabel trilogy bookmark, The Annabel Trilogy Part III: Confessions Double Vinyl (limited number to print). Pre-orders for both the Vinyl Bundle and general pre-order of the 2nd edition book can be found at RevivalRecs.com! Vocalist/Guitarist, Shawn Milke had this to say about the announcement:

“Due to very humbling popular demand, I am excited to announce a 2nd edition run of ‘Annabel’.  It has a new introduction, Q&A with fans, exclusive new cover art, AND a sneak peek at chapter I of the sequel ‘Madeline’.  We are also pressing a limited amount of vinyls for the special edition extended release of Confessions! This book is because of you, thank you all from the bottom of my heart.  Believe in the unbelievable.”

Created by Vocalist/Guitarist, Shawn Milke and Vocalist, Dennis Lee of Alesana, reveals all of the final twists and turns of Annabel, The Artist, and Fatima Rusalka. The trilogy opens with The Emptiness, the story of The Artist and his one true love, Annabel which was released in 2010 via Fearless Records. Continuing with A Place Where The Sun Is Silent, where the album follows The Wanderer on an abstract journey of pursuit of The Temptress (2011, Epitaph Records). And the final third album in the trilogy, Confessions, the story that follows Annabel and her attempt to travel through time in order to stop a madman known as The Artist.

“This story has been a work in progress for nearly seven years,” says Milke. “It began when Dennis and I decided to tell our own story through the albums of Alesana. It eventually grew into an album trilogy and now, finally, a short novel. Creating this abstract universe and telling the story of Annabel has been, in every way possible, both challenging and rewarding. It is an accomplishment that still stuns me to this day. Thank you to everyone who has joined us on this journey.”

Milke and his sister Melissa narrated a reading of the first chapter of Annabel which can be heard here. The pair partnered with director Jason Ligon to turn the reading into a lyric video which premiered exclusively on Tattoo.com. To learn more about the Annabel Trilogy, fans are encouraged to head over to the short novel official website: theannabeltrilogy.com.

Previous Did You Hear “No Luv” by Bando Bando 🐋🐬?
Next PVRIS Debuts New Song “Winter”